Speaking From the Heart 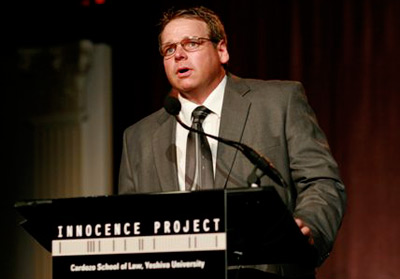 The Exoneree Speakers’ Bureau educates the public about wrongful convictions from those who know most about the experience — the exonerated.

“You know how hard it is when you’re in prison to get somebody to listen to you?” asks

He’s speaking to a group of about 50 eighth graders from the Math and Science Exploratory School in Brooklyn, New York, who have gathered to hear him tell about his 19 years of wrongful imprisonment for murder. Since his exoneration in 2005, Gibbs has spoken to many different groups about his case – lawyers, students, doctors, even mystery writers – and thousands of people have heard his story. During his imprisonment, Gibbs could only dream of such audiences. Now that he has cleared his name and been exonerated, he lends his voice to the effort to raise awareness about the problem of wrongful convictions.

Among this group of eighth graders, there is a notable absence of whispering, notepassing, gum chewing and other antics. When Gibbs finishes speaking, a dozen hands shoot up: “What’s prison food like?” “Did you have any friends in jail?” “What do you do now?” Prison food is terrible, he says. He did have friends in jail, and some were even innocent. Now, he takes life one day at a time and enjoys his freedom. As the students file out of the classroom at the end of the period, he leaves them with a simple message: “You can make a difference.”

fields a very different set of questions from a group of attorneys and judges at the “Red Mass,” an annual celebration of the Catholic Church to bless the state’s judiciary system: “How did you cope with incarceration when you were innocent?” “What kind of representation did you have?” “How did you react to the news that you would be exonerated?” Maher, who began speaking publicly only six weeks after his exoneration in 2003, appreciated the opportunity to reach this special audience. He reports, “There were Supreme Court justices from Maine, federal senators, superior court justices, lawyers, six priests, a bishop and two monsignors.” Maher adds, “A few people cried. I get emotional too. I’m not the monotone type.”

Eric Wycoff, the attorney who organized the event, agreed. “There were a lot of wet eyes. Really very moving – that was the universal reaction I heard from folks. This is the first time we’ve ever had a client speak to us. We’ve had judges, lawyers, a diplomat, but this is the first time that we’ve ever had someone come that was on the other side of the attorney-client relationship and that was very positive.”

These two speaking engagements exemplify the important work that exoneree speakers are doing all over the country, from the East Coast, to the Midwest, to Texas and the South. A diverse array of audiences are interested in hearing their testimonials – legal and law enforcement organizations, high schools, law schools, religious groups and civic groups – and they’re inviting exoneree speakers back year after year.

Former Oneida County Bar Association President Larry Golden has hosted six successful events featuring exoneree speakers. “After each event we had a reception where audience members had an opportunity to rub elbows with the exoneree and just make conversation. It’s meeting the exonerees face to face that makes it real for the audience. I don’t think you ever forget the experience of hearing an exoneree tell their story.”

Although many audience members will already know about the Innocence Project, and some will even know that over 260 people have been exonerated through DNA testing, very few will have ever heard the testimony of an actual exonerated person. It’s the closest one can ever come to imagining the unimaginable – being wrongfully accused  and convicted. The relationship is rewarding for both parties – the public who seek a fuller understanding of the issue, and the exonerees who are driven to share their experiences of injustice.

, who was exonerated in 2009, gained public speaking experience while he was still in prison as the master of ceremonies for prison events. After over 18 years of wrongful incarceration, he knew that he would continue to pursue public speaking after his release. “I feel it’s a calling,” he says. “I’m promoting social awareness of the criminal justice system, but I’m also speaking to the human experience. My story is about believing that you can overcome any obstacle. I want the audience to come away with that. I want us to learn from each other.”

The Innocence Project works to connect members of the Exoneree Speakers’ Bureau to audiences nationwide. Not all of the speakers are exonerees, some are family members and loved ones. Sylvia Bouchard, mother of exoneree

), often accompanies her son to events in addition to speaking to groups on her own.

“Steve always says that when he was incarcerated the whole family was incarcerated, and that was true. We went through the motions; we never really enjoyed anything for 20 years. I think it’s so important to get our story out that this could happen to anyone. Steve came from a loving home – he was a football player and an altar boy.”

Whether the audience consists of 14-year-old future jurors or superior court justices with a lifelong commitment to the criminal justice system, anyone can benefit from hearing the firsthand account of a wrongful conviction.

Sometimes, an Innocence Project staff member is available to speak as well. To learn more about the bureau, or to request a speaker, see our