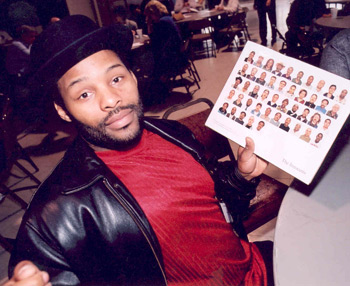 will mark the seventh anniversary of his exoneration in Ohio. Although he was freed in 2001, he and the Innocence Project had been working since 1997 to clear his name. In all, he spent 13 years in prison before DNA testing proved his innocence.

In 1988, a Caucasian woman in a health clinic was raped at knifepoint. The attacker cleaned himself with a washcloth before fleeing the room, and threw it on the floor. The victim immediately rinsed herself off and called security. The police collected the washcloth and brought the victim to a medical center, where a rape kit was prepared. Green, who had previously worked for the clinic, became a suspect because a security officer said the victim's physical description of the attacker reminded him of Green.

The prosecutor's main evidence at trial relied on the victim's misidentification of Green and on misleading blood type testing from a state expert. The expert testified that Green could have contributed the semen found on the washcloth – along with only 16 percent of the male population. But the percentage of the population that could have contributed the sample was actually much higher. Based in part on this faulty testimony, Green was convicted and sentenced to 20-50 years in prison.

Green’s stepfather, Robert Mandell, investigated his case relentlessly in an attempt to overturn the wrongful conviction. It was not until Mandell located the washcloth in a courthouse storage room in 2001 that DNA testing could be conducted, proving Green’s innocence. After proving his innocence, Green said, "You can't get the lost years back. You just have to pick up the pieces and go on with your life."

The DNA testing in Green’s case didn’t only exonerate him, but also led to the identity of the real perpetrator. A man named Rodney Rhines confessed to the rape after reading an Ohio newspaper article that documented Green's ordeal. Also, the city of Cleveland agreed to compensate him and created the "Anthony Michael Green Forensic Laboratory Audit." The audit addresses the causes of faulty and falsified forensics, a factor that played a significant role in many wrongful convictions.

Other Exoneree Anniversary This Week: