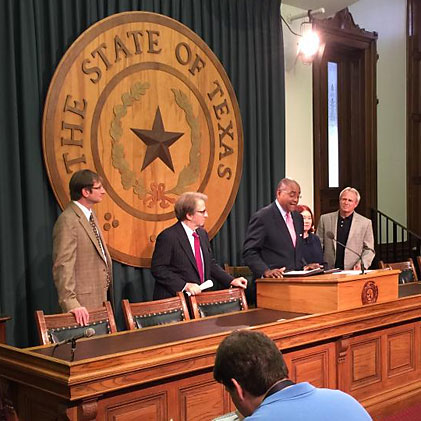 The state legislature amended the Texas statute in 2011 after the Court of Criminal Appeals denied testing to death row inmate Larry Swearingen, who has argued for years that he is innocent of the murder of a 19-year-old college student. The new law, Chapter 64 of the Texas Code of Criminal Procedure, was amended to provide the broad right to conduct DNA testing on essentially all crime scene evidence that can yield probative evidence of innocence. Specifically, the revisions sought to address advances in DNA technology that now enable scientists to identify DNA profiles from skin cells and other microscopic biology recovered from crime scene evidence. The 2011 revisions also required that profiles be uploaded to both the state and federal DNA database to see if they matched to a known criminal offender.

Despite the fact that the 2011 revisions were passed almost unanimously in the House and Senate and signed into law by Gov. Rick Perry, the Court of Criminal Appeals again denied Swearingen access to testing in a February 2014 decision. Although the court acknowledged that courts must consider testing of skin cells (which are microscopic), the court placed an impossible burden on the defendant that he or she prove that the microscopic materials exist before testing is granted. The court also refused to acknowledge that having the ability to upload profiles to the state and federal databases can produce critical proof of innocence, as it did in the Michael Morton case and many others.

According to Senator Ellis, “When the legislature amended the DNA testing law in 2011, we intended to give people broad access to DNA testing that could prove innocence. Unfortunately the Court of Criminal Appeals has issued decisions narrowly interpreting the statute, so we need to make it crystal clear that those accused and convicted of crimes should have broad access to this important evidence.”

Michael Morton, who wrongly served 20 years for the murder of his wife before he was exonerated by DNA testing, added, “I had to fight over a decade while in prison for the testing that not only proved my innocence but also solved another subsequent murder. If DNA testing can shed light on a criminal case, by all means, it should be permitted.”