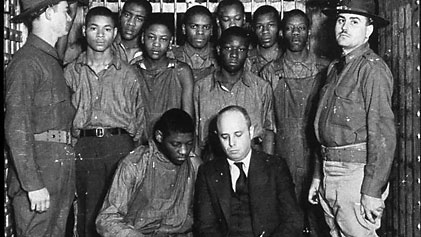 More than 80 years after nine black teens were wrongfully convicted of raping two white women in 1931, the Alabama House of Representatives voted 103-0 in favor of legislation setting up a procedure to posthumously pardon them. The Senate already passed the bill, 29-0 and Gov. Robert Bentley has indicated he will sign it.

Known as the Scottsboro Boys, the group was traveling on a freight train through Scottsboro, Alabama, when a fight broke out between them and a group of white boys. After being arrested by police, two white women said they were gang raped on the train. Despite claims of innocence, the Scottsboro boys were convicted by all-white juries. All but one of them served time on death row.

The next two decades were full of appeals and one retrial where one victim said the rape never happened. Still, the boys remained bars. Eventually, the convictions were reduced or dropped entirely. The last of the men died in 1989. The Associated Press reports:


Benjamin Todd Jealous, president and CEO of the NAACP, applauded the correction of “an historic miscarriage of justice.” But he noted that Alabama is involved in a Supreme Court case over the Voting Rights Act and has passed laws called discriminatory against immigrants in the country illegally.

“Like so many communities that have had tried to move beyond their ugliest chapters, Alabama has learned you can only move forward if you are honest about your past,” Jealous said. “It’s heartening that this was a unanimous vote.”

the Scottsboro Boys and other historical African American wrongful convictions