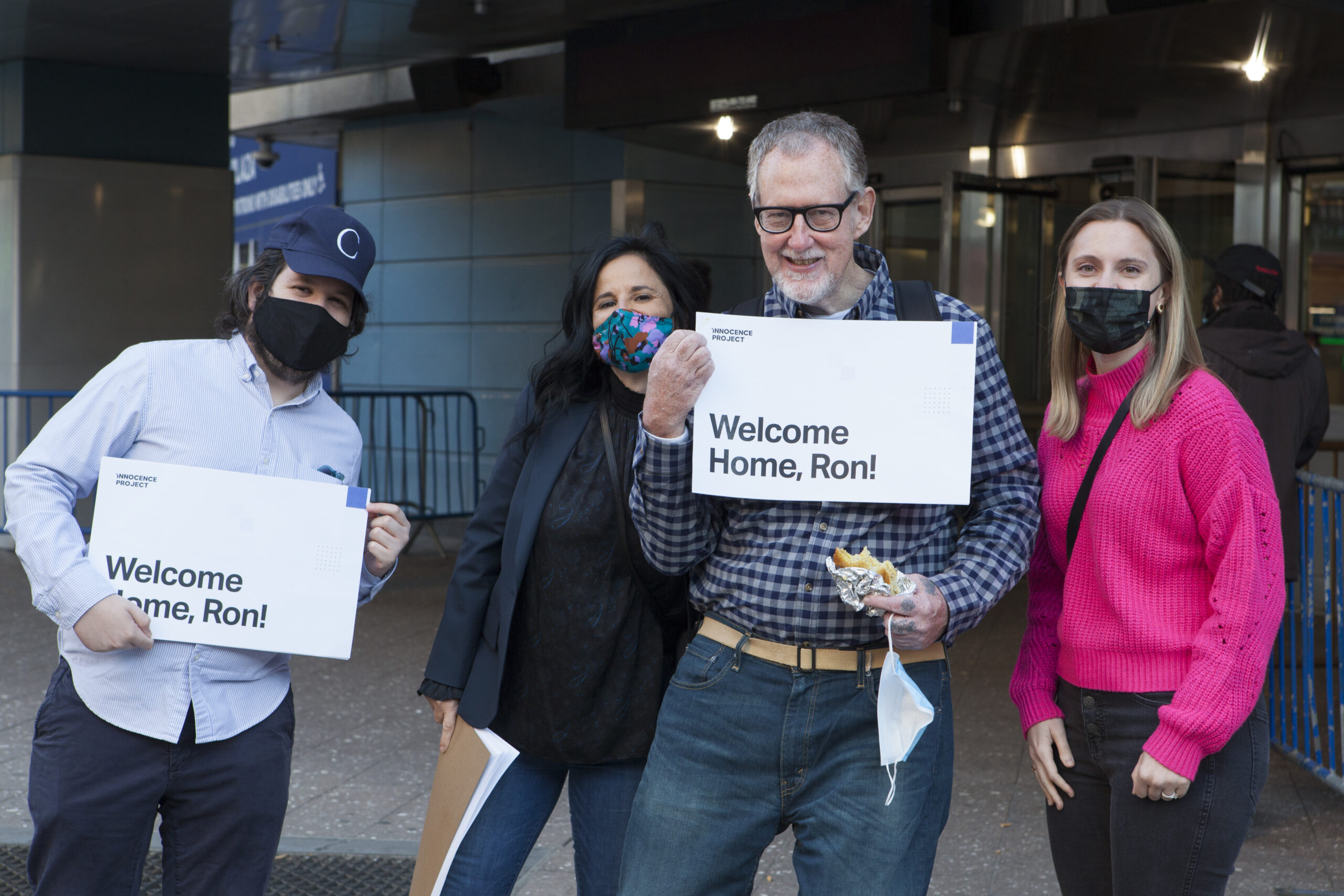 Ron Jacobsen (second from right) returns to his hometown of New York City for the first time in 30 years on Nov. 4, 2020. Mr. Jacobsen was released on bail on Nov. 3, after DNA evidence proved his innocence in 2019. His lawyer Vanessa Potkin (second from left) met him at Pennsylvania Station. (Image: Daniele Selby/Innocence Project)

Mr. Jacobsen, whom DNA evidence has excluded as the attacker, was released on bail this week after more than 1,300 people donated to his family’s effort to bail him out. Their overwhelming support helped raise the $55,000 non-refundable fee to pay a bondsman. Mr. Jacobsen’s full bail amount was set at $500,000.

“I’m overwhelmed by the outpouring of help to a total stranger from so many people. This reassures my faith in human beings,” Mr. Jacobsen said upon learning so many people had contributed to his bail fund.

Though DNA testing, secured by the Innocence Project along with the Georgia Innocence Project, excluded Mr. Jacobsen as the attacker in 2017, it was another two years before his conviction was overturned. In 2019, rather than dismiss the charges, the Newton County District Attorney’s Office announced it would re-try Mr. Jacobsen and opposed his release on bail ahead of his retrial. At the same time, the district attorney offered him a deal — instead of going to trial again, he could plead guilty and be released immediately with time served.

Mr. Jacobsen was determined to prove his innocence, and although he feared the rapid spread of COVID-19 in jails, he declined the offer.

“I live my life with hope, always hope, that my future will be better than the past and present, but only as long as I work to make it so … By taking any type of plea bargain, I’m giving up on my hopes and future,” Mr. Jacobsen wrote to his lawyers in April 2020.

“As much as I want to be free, I have no option but to fight the injustice being done in my case,” he wrote in a subsequent email.

Last month, Mr. Jacobsen was finally granted a new bond hearing, and though the district attorney initially opposed his release on bond, he proposed a bond of $50,000. The court ultimately set his bail at a half-million dollars — 10 times the proposed amount.

Mr. Jacobsen has been wrongfully incarcerated hundreds of miles away from his family for 30 years. During that time, he lost the chance to raise his son and to know his grandson, and his mother passed away. At the time the crime occurred in Georgia, he was in Tennessee with his fiancée. They were never able to marry and start the life they’d hoped planned together. His mother passed away.

Today, he was finally reunited with his older sister, just one day before her 80th birthday. Mr. Jacobsen, his family, the Innocence Project, and the Georgia Innocence Project are continuing to fight for justice in his case.