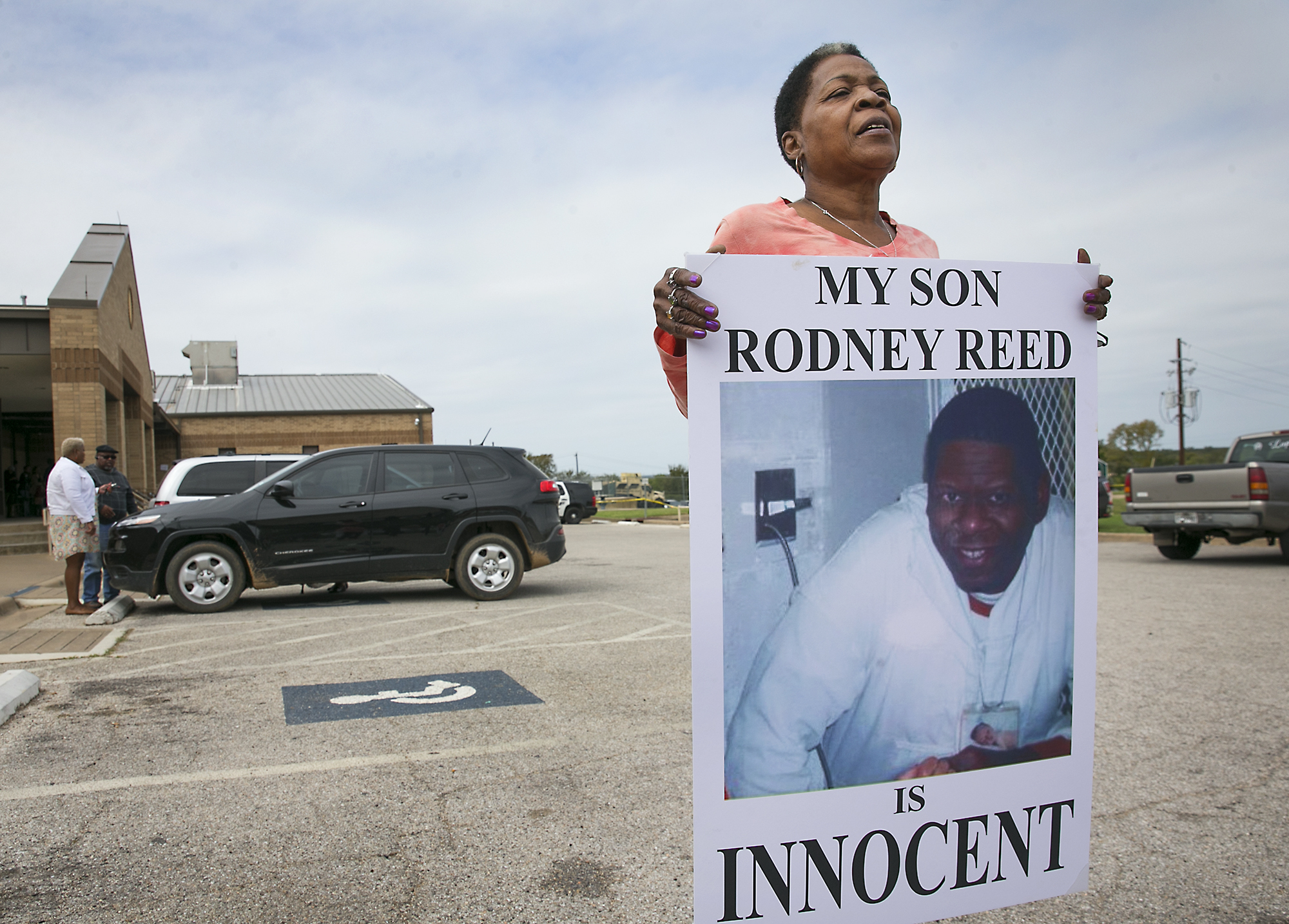 Sandra Reed, the mother of Rodney Reed, shows her continued support for her son outside a Texas courtroom on Oct. 10, 2017. (Ralph Barrera/Austin American-Statesman via AP)

(Bastrop, TX – October 21, 2019) Today, Rodney Reed, who is set to be executed on November 20, 2019, for a crime he did not commit, called upon Texas Governor Greg Abbott to exercise his authority to grant a 30-day reprieve to spare Reed’s life. The letter to Gov. Abbott, sent by Reed’s attorneys with the Innocence Project, also asks the governor to order the Texas Board of Pardons and Paroles to investigate whether a commutation of Reed’s death sentence should be granted in light of the mounting evidence pointing to his innocence. Reed has been on death row for over 21 years.

Related: 10 Facts You Need to Know About Rodney Reed

In the decades since Rodney Reed’s conviction and death sentence for the 1996 murder of Stacey Stites, ample evidence has not only contradicted every aspect of the state’s case against him, but also strongly implicated Stites’ then-fiancé, Jimmy Fennell, who was both a local police officer and a suspect in the murder at the time.

Mr. Reed did not sexually assault or murder Stacey Stites that night in 1996.

“It is clear to anyone who looks at the evidence in this case that, quite simply, Mr. Reed did not sexually assault or murder Stacey Stites that night in 1996,” says Bryce Benjet, a senior staff attorney at the Innocence Project. “Medical and scientific evidence confirm this and multiple new and credible witnesses not only confirm Reed’s intimate relationship with Stites, but also implicate Fennell in her murder. If the great state of Texas puts Mr. Reed to death, it will be a miscarriage of justice that will destroy even more innocent lives in this case and do irreparable damage to public confidence in the accuracy and fairness of the criminal justice system in Texas.”

In the past few weeks, a substantial amount of new information demonstrating Reed’s innocence has come to light. Three new witnesses, who knew Fennell at the time of Stites’ murder, have come forward with information corroborating the already substantial evidence of Reed’s innocence and establishing a violation of due process. In order to further investigate this newly discovered evidence, the withdrawal of the impending execution date is required under the Texas Code of Criminal Procedure.

Most recently, an affidavit providing sworn testimony from former Bastrop Sheriff’s Officer Charles Wayne Fletcher, a colleague and friend of Fennell at the time of Stites’ murder, establishes motives of both racial animus and revenge for Fennell against Stites. Fennell, who was an early suspect in the Stites’ rape and murder, later pleaded guilty to kidnapping and sex charges after he was indicted for abducting and raping a different woman who he encountered while on-duty as a Georgetown police officer.

“I was so disturbed by his behavior that it caused me to question whether he was involved in Stacey’s death.”

In the new affidavit, Fletcher describes the deteriorating relationship between Fennell and Stites in March 1996 and recalls that Fennell made a disturbing and bigoted statement that Stites was having an affair: “… I remember clearly that Jimmy said that he believed Stacey was ‘f***ing a n*****’.” It also notes Fennell’s “odd, emotionless behavior” at Stites’ funeral and burial services. “I was so disturbed by his behavior that it caused me to question whether he was involved in Stacey’s death,” Fletcher’s affidavit states. “I also chose to have no further interaction or communication with him.”

Fletcher’s statement comes on the heels of two other new affidavits implicating Fennell in the murder: one from an insurance salesperson who stated that Fennell threatened to kill Stites while applying for life insurance, and the other from Jim Clampit, a deputy in the Lee County Sheriff’s Office at the time of the murder, to whom Fennell made an alarming and inculpatory statement at Stites’ funeral regarding Stites’ body. This new evidence could not have been discovered or presented in any of Reed’s prior pleadings and supports his actual innocence.

After watching the movie I opened up my computer & opened up my email about a case I had recently been investigating, @FreeRodneyReed. I have been hearing about him and his story for the last week. On Nov. 20, Texas will execute Rodney Reed. I believe he is innocent.

Previously, Stites’ cousin has affirmed that Reed and Stites were romantically involved, while Fennell’s best friend at the time, Bastrop Sheriff’s officer, Curtis Davis, has revealed that Fennell gave an inconsistent account of where he was on the night of the murder.

Forensic experts who implicated Reed at trial have recanted their opinions, and leading forensic pathologists have since concluded that the state’s theory of Reed’s guilt is medically and scientifically impossible. Despite overwhelming evidence of Reed’s innocence, Texas courts have consistently refused to consider the forensic evidence proving Reed did not commit the crime and denied access to DNA testing that can confirm Fennell’s guilt.

Especially in light of the new evidence that has continued to emerge, a reprieve will afford the Board of Pardons and Paroles the time it needs to fully investigate this voluminous and compelling case and provide recommendations to the governor that are the product of a thorough and orderly process.

Reed’s call for justice, commutation and exoneration has recently been taken up by high-profile individuals, including Dr. Phil McGraw, Kim Kardashian West and Mark Cuban. This month, Dr. Phil featured Reed’s case on his television show. Dr. Cyril Wecht, a forensic pathologist who has examined Stites’ autopsy report, insisted, “without hesitation, that this is one of the clearest, unequivocal cases of gross misjudgment – of a travesty of justice – that I’ve ever seen.”

The state of Texas needs to make sure they are getting this right @GovAbbott https://t.co/un3z6VsAIE