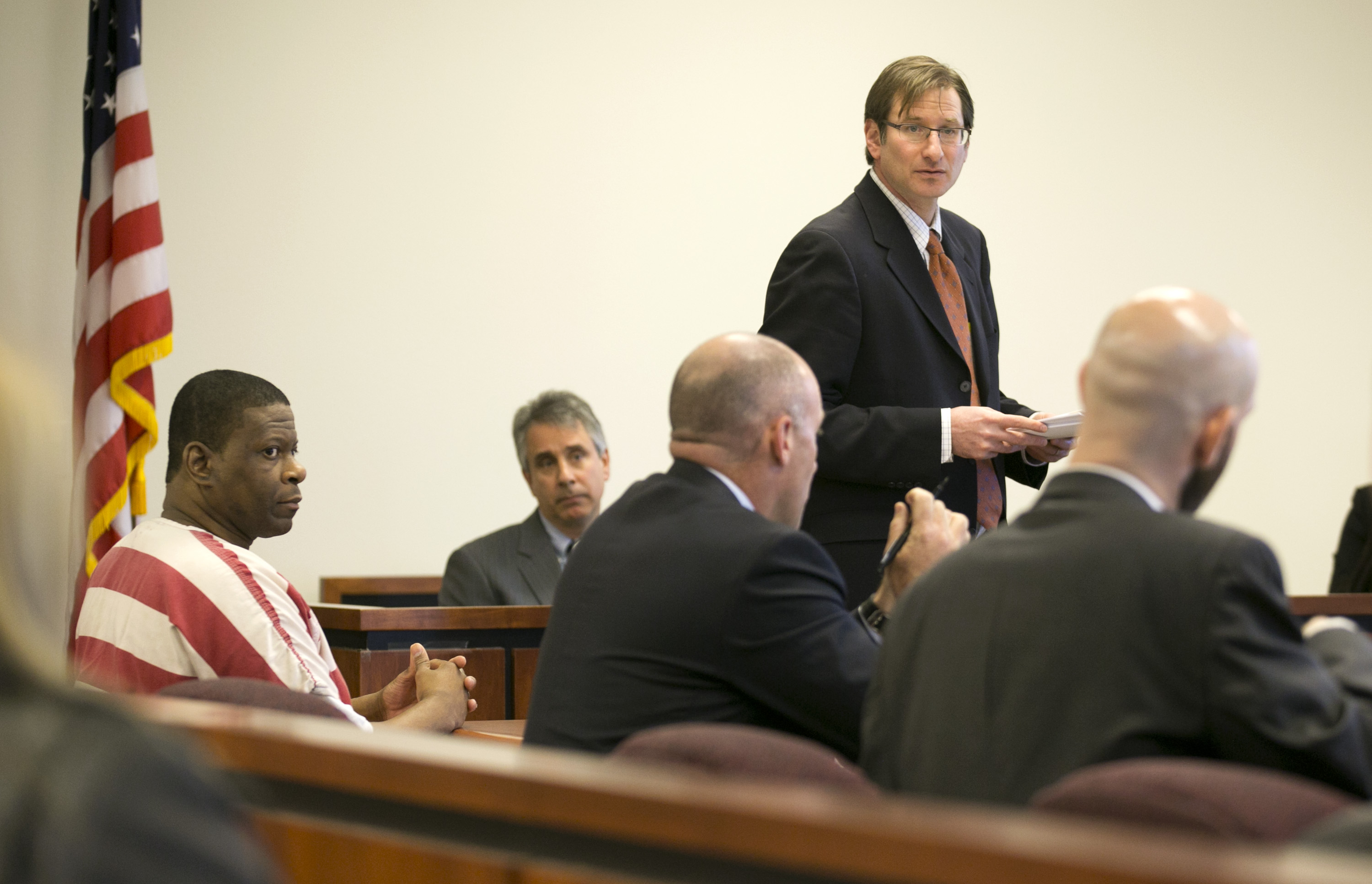 Rodney Reed, left, listens as his attorney Bryce Benjet, standing at right, speaks at a hearing at the Bastrop County Criminal Justice Center in Bastrop on Tuesday November 25, 2014. (Jay Janner/Austin American-Statesman via AP)

(November 12, 2019 – Bastrop, TX) Yesterday, lawyers for Rodney Reed, who remains on Texas’ death row, filed a Writ of Habeas Corpus with the Texas Court of Criminal Appeals and the 21st Judicial District Court asking the court to vacate Reed’s conviction and death sentence because of even more new evidence that proves Reed did not murder Stacey Stites. Several more witnesses have come forward with powerful new credible information that exonerates Reed and inculpates Stites’ fiancé, Jimmy Fennell, Jr., in her murder.

Four new witnesses have been located in the past few days with additional evidence that refutes the state’s portrayal of Fennell and Stites as a happy couple eagerly anticipating their upcoming wedding. This new evidence includes declarations from:

“We continue to follow every investigative lead in this case, and this painstaking work continues to bear fruit. These are not people coming out of the woodwork. They are police officers, verified co-workers of the victim, and her neighbors. These people have nothing to gain by telling us what they know; and what we have learned corroborates Mr. Reed’s relationship with Ms. Stites and further implicates Jimmy Fennell in the murder. While Bastrop County law enforcement clearly suspected Fennell in 1996, it is increasingly apparent that their shoddy investigation and rush to judgment against Mr. Reed resulted in the wrong man landing on death row,” said Bryce Benjet, Reed’s lawyer and senior staff attorney at the Innocence Project, which is affiliated with the Benjamin N. Cardozo School of Law.

Additionally, renowned forensic pathologist Michael Baden, M.D. also testified at a hearing in 2017 that the condition of Stites’s body rendered the state’s theory of Reed’s guilt impossible.  Where the state argued Stites was killed between 3-5 a.m. on April 23, 1996, the evidence showed that Stites was actually killed before midnight on April 22nd. Baden’s testimony was corroborated by two other leading experts and uncontradicted by the state.

Related: 10 Facts You Need to Know About Rodney Reed

In the 20 years since Reed’s trial, there is substantial evidence that both exonerates Reed and implicates Fennell. New witnesses have come forward, including Stites’ cousin, who was aware that Reed and Stites were romantically involved. Fennell’s best friend at the time, Bastrop Sheriff’s Officer Curtis Davis, has revealed that Fennell gave an inconsistent account of where he was on the night of the murder. Fennell, who was recently released after serving a 10-year prison term for a sex crime, had told his friend he had been out drinking on the night Stites was murdered. He later claimed he was with Stites in their apartment during the time that we now know was the actual time of her death, based on Dr. Baden’s updated testimony. When asked to explain this discrepancy, Fennell declined to testify because his answers might further incriminate him.