The CRU announced their collaboration with the Innocence Project to audit prior cases involving bite mark evidence. 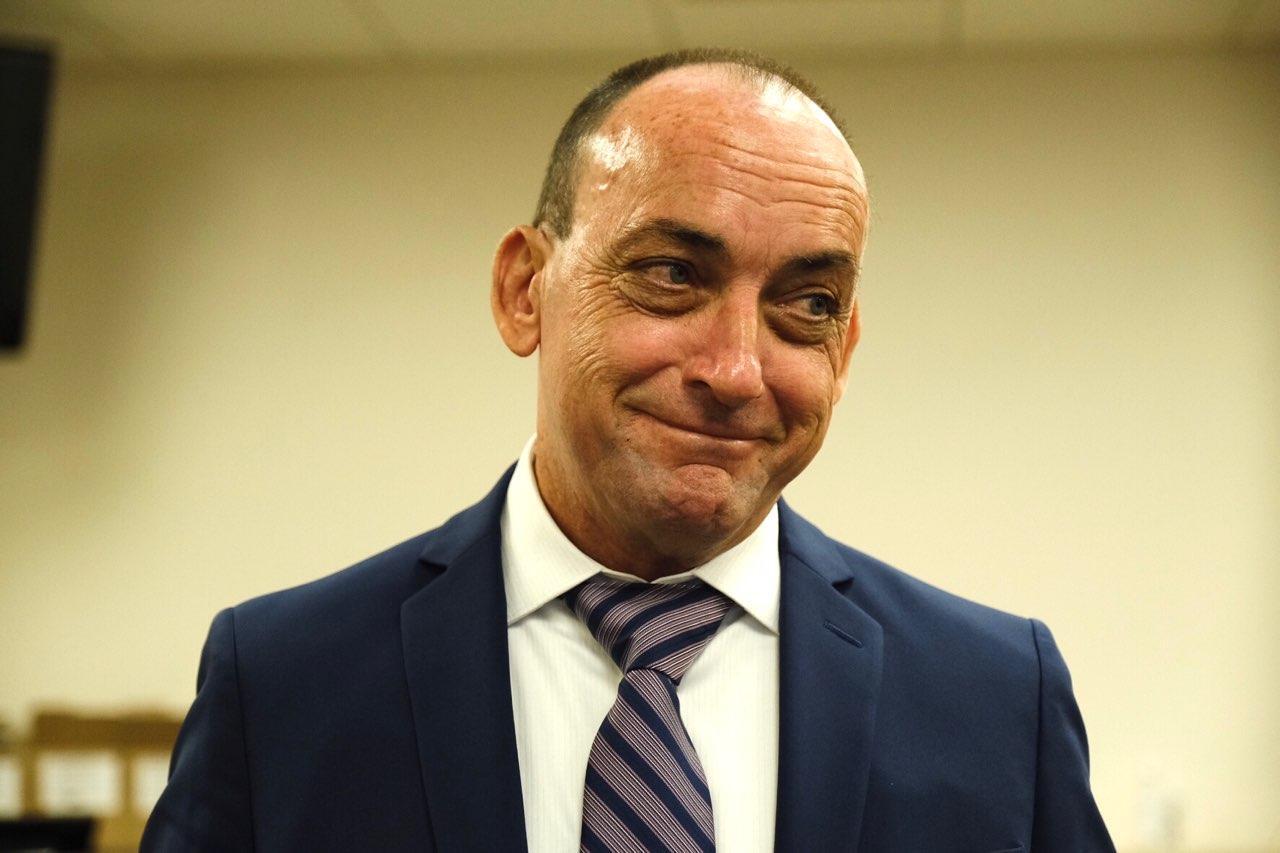 (September 14, 2020 — Tampa, Florida) Today, Robert DuBoise was exonerated from all charges in the 1983 rape and murder of a young woman in Tampa, Florida. DuBoise was released from prison on Aug. 27 after new DNA testing on evidence from the victim’s rape kit that was thought to have been destroyed, excluded him as the assailant and identified another individual. The Conviction Review Unit (CRU) at the Office of the State Attorney for the 13th Judicial Circuit has announced that in light of the clear injustice that occurred in this case and the discreditation of bite mark analysis as a reliable scientific technique, they will collaborate with the Innocence Project to review Hillsborough County cases that utilized bite mark evidence to secure a conviction. This is the first type of audit to be done by a CRU.

Support Robert with a gift to his personal fundraiser

“Today, Robert finally has some measure of justice. His strength, courage, and determination for nearly four decades has made this day possible. We knew that Robert’s conviction rested on two leading causes of wrongful convictions– jailhouse informant testimony and faulty forensics–and today, there is indisputable scientific evidence that proves his innocence. I am grateful to the Conviction Review Unit for their partnership on this case and look forward to collaborating on re-examining other bite mark cases to identify other wrongful convictions that resulted from the use of this highly unreliable evidence.” said Susan Friedman, DuBoise’s Innocence Project attorney.

“I have been waiting for this day for nearly 37 years. I always knew that DNA would prove my innocence and hoped that the evidence could be found not just for me, but for my family as well. I hope that my story helps others to keep fighting to prove their innocence. I can’t get back the decades that I lost, but I’m going to try to rebuild my life with my family. It won’t be easy. I am just so grateful that my voice was heard and the truth is out there,” said DuBoise.

“Today’s exoneration finally removes the shackles from Robert DuBoise. He now has the freedom he has deserved all along. Once again, I apologize to Robert on behalf of the entire justice system for all he has gone through. Even after nearly 37 years, a prosecutor’s job is to seek justice, and that obligation to seek justice never ends. Wrongful convictions deprive victims and their families of justice; they deserve the truth—not false closure based on a false story. Beyond that, wrongful convictions threaten public safety, putting an innocent person behind bars while the actual person who committed the crime goes free,” Hillsborough State Attorney Andrew Warren said.

The CRU’s audit is the first systematic review of bite mark cases that has been initiated by a prosecutor’s office. DuBoise is not alone in being convicted based on unreliable bite mark evidence — at least 33 known wrongful convictions and indictments have stemmed from bite mark evidence. For decades, forensic odontologists testified that they could identify the source of a bite mark. However, years of research have wholly undermined this assertion. The significant changes in the understanding of bite mark evidence have led the American Board of Forensic Odontology (ABFO) to revise its standards and guidelines to explicitly state that “an ABFO Diplomate shall not express conclusions unconditionally linking a bite mark to a dentition.” As a result, the forensic odontologist’s testimony in DuBoise’s case would no longer be admissible.

The case against DuBoise was weak from the start. All of the other physical evidence excluded DuBoise and there were no eyewitnesses that placed him near the crime scene. As the case headed for trial, the State used a jailhouse informant to help build its case. The informant was facing multiple life sentences for kidnapping, armed robbery and battery of a law enforcement officer. After cooperating with law enforcement and providing a sworn statement in DuBoise’s case, he was offered a plea and sentenced to five years in prison. After testifying in court against DuBoise and once a death sentence was secured, the informant received a further sentence reduction to time served and he was immediately released. It was DuBoise’s trial prosecutor who filed a Motion to Mitigate the jailhouse informant’s sentence citing his “total cooperation” with the State in DuBoise’s trial. The State sought this sentence reduction even though the Florida Parole and Probation Commission recommended against an earlier presumptive parole date.

At DuBoise’s trial, the jailhouse informant explained that he was testifying for two reasons: (1) he did not condone forcing a woman to do anything; and (2) he did not want Robert to take the whole blame for the crime. He denied receiving any benefit in exchange for his testimony. Despite testimony that the informant did not work as a cooperating informant, the CRU’s re-investigation revealed that the jailhouse informant was, in fact, an informant; that he had provided information on other murders and rapes in the Tampa Bay area; and that one of the detectives was the informant’s “handler.” Additionally, a memorandum from the State Attorney’s file that was disclosed during the Innocence Project and CRU’s joint post-conviction re-investigation indicated that the jailhouse informant strongly inferred that he was looking for a sentence reduction in exchange for his cooperation with law enforcement and the prosecutor on the DuBoise case. This directly contradicted the Assistant State Attorney’s statement to the jury that the informant was in prison and that he would be going right back to prison to finish serving his sentence.

Jailhouse informant testimony plays a leading role in 17% of the 375 DNA-based exoneration cases. The promise or expectation of receiving leniency or other benefits for their testimony creates a strong incentive for these witnesses to lie. In many wrongful convictions, such as DuBoise’s, these benefits provided in exchange for their testimony are never disclosed.

The state’s theory at trial was that on Aug. 18, 1983, DuBoise, his brother Victor DuBoise and friend Raymond Garcia sexually assaulted and killed a 19-year-old woman, though only DuBoise was arrested and prosecuted for these crimes. In March 1985, a jury convicted DuBoise of capital murder and attempted sexual battery. The jury recommended a life sentence, but the judge overrode the recommendation and sentenced DuBoise to death. He served three years on death row before the Florida Supreme Court vacated his death sentence. DuBoise was re-sentenced to life for the murder and 15 years for the attempted sexual battery to run consecutively.

In August 2006, DuBoise filed a motion for post-conviction DNA testing. At a 2008 hearing, the Court Clerk testified that all the evidence admitted at DuBoise’s trial, which included the victim’s rape kit, were destroyed in 1990, just five years after his conviction. The judge denied DuBoise’s request to test the other biological evidence, finding that because the State’s theory was that DuBoise committed this crime with others, excluding him from the evidence would not be sufficient to prove his innocence.

The Innocence Project began investigating DuBoise’s case in 2018 and in 2019 and requested that the CRU reopen the case based on new evidence about the jailhouse informant and concerns about the discredited bite mark evidence. As part of this effort, both parties worked collaboratively to re-investigate this crime. During the reinvestigation, Dr. Adam Freeman, a forensic odontologist, reviewed the bite mark evidence and testimony in this case. He concluded that the original bite mark conclusions are unsupported by science and, most critically, found that although three experts at trial concluded that the mark on the victim’s cheek was a bite mark, the injury in this case was in fact not a bite mark.

In 2020, despite previous assurances that all the biological evidence from the rape kit was destroyed, slides from the victim’s autopsy were also found at the office of the Medical Examiner for Hillsborough County. DNA testing was conducted this summer and found that DNA from two males was present and excluded DuBoise. The DNA profile was entered into CODIS and matched to an individual who had no connection to DuBoise.

On Sept. 10, 2020, the Innocence Project filed a Motion for Post-Conviction Relief and Vacate Judgment and Sentence based on newly discovered evidence. On Sept. 11, 2020, the State filed its response asking that the Court find DuBoise “innocent of the charges against him and to signify the Court’s ruling as an exoneration of Mr. Robert DuBoise.” The CRU also issued a Summary Fact Finding Report that stated that if Mr. DuBoise would be retried today, “there would be clear and convincing evidence that he is innocent of the charges against him.”

Under Florida’s current compensation law, DuBoise is not eligible to receive any compensation for the 37 years he was in prison because, when he was a teenager, he was previously convicted of minor offenses related to the possession of a stolen bike, and entering a vacant home that was unlocked. Florida is the only state that disqualifies exonerees from being compensated if they were convicted of unrelated crimes. The Innocence Project is advocating for legislation to remove this provision.

DuBoise is represented by the Innocence Project, who worked collaboratively with the Conviction Review Unit at the Office of the State Attorney for the 13th Judicial Circuit in Tampa. The Innocence Project of Florida served as local counsel on the case.

The Innocence Project, which is affiliated with Benjamin N. Cardozo School of Law at Yeshiva University, is a national litigation and public policy organization dedicated to exonerating wrongfully convicted people through DNA testing and reforming the criminal justice system.