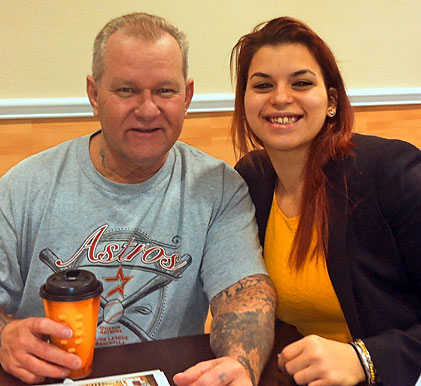 
On May 5, I’ll be joining the Innocence Project Team in the TD Five Boro Bike Tour in New York City. I’ll be riding 42 miles covering each of the five boroughs—starting in Manhattan and ending in Staten Island—with Innocence Project staff members and supporters. We each have our own inspiration for wanting to raise funds for the organization. Randy Arledge is my inspiration.

When I began interning at the Innocence Project in June 2012 as a Cardozo Law School student, I was assigned Randolph “Randy” Arledge’s case along with four other cases. Randy was convicted of the 1981 murder of a young girl in Corsicana, Texas, based almost entirely on jailhouse informant testimony. Despite the fact that there was no physical evidence tying Randy to the crime scene, he was sentenced to life imprisonment.

My supervising attorney informed me that we had a CODIS “hit” from a hairnet found in the victim’s car. Since the hairnet belonged to a convicted felon, I figured the case would soon be resolved, and Randy would be released. However, we still had to convince the prosecutors of Randy’s innocence.

For the next couple of months, Randy and I spoke on the phone frequently. I tried to keep his hopes up, but it was Randy that kept me from losing faith. I couldn’t fathom how someone in his condition wasn’t bitter. We spoke several times a week, and he would thank me every single time. “Thank me for what?” I thought to myself. Every time I had to say, “I have no news for you,” a little part of me secretly gave up hope.

In August, we submitted an open records’ request for the perpetrator’s criminal record. As it turns out, he had previously committed a crime nearly identical to the crime in Randy’s case. I wanted to get excited, but I didn’t want to hear “well, what does this really mean?”

From that moment, things started moving fairly quickly. The co-defendant recanted his testimony, and the district attorney agreed to work with us in order to exonerate Randy on the basis of actual innocence. I was truly happy for Randy, but we both knew the process could take several more months.

Upon returning from winter break, there were discussions about Randy’s exoneration. All the back-and-forth with the district attorney kept me grounded. I knew Randy was going to get out eventually, but I didn’t think that I would be around to see it happen.

Then, out of the blue, the paralegal approached me and asked, “You know you’ll be going to Texas for the exoneration, right?” I couldn’t believe it! I was going to be there the day my client was declared an innocent man. Randy was cleared and released on February 11th, two days before my birthday. Needless to say, that was the best birthday gift anyone could’ve ever given me.

Randy’s been out almost three months now, but we still talk and text on a regular basis. He’s experiencing everything for the first time, and I’m blessed to be able to share these moments with him. This week, Randy will remarry his ex-wife and the mother of his children. Although the two were estranged during his many years of false imprisonment, they have reestablished their close relationship since his release.

As I ride through the Five Boro Bike Tour, I’ll think of Randy cheering me on. He was forced to sacrifice 32 years of his life for a crime he didn’t commit, and yet he NEVER lost hope. These miles are for Randy – for every year he was in jail, for every blessing he sent my way and for every moment he has yet to experience!