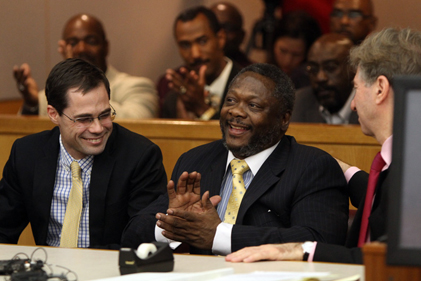 Four months after being released from a Texas prison for a rape DNA and other evidence prove he did not commit, Rickey Wyatt’s conviction was officially vacated by the Court of Criminal Appeals.

In the opinion issued today, the court determined that Wyatt’s wrongful conviction was a result of the state concealing evidence that supported his innocence during the trial. After three decades and with the cooperation of the current prosecutor, evidence pointing to his misidentification was revealed. If the defense had been able to present this evidence at trial, Wyatt may never have been convicted.

Wyatt was arrested in January 1981 as a suspect in three different sexual assault cases. He maintained his innocence from the beginning and turned down a plea bargain of a recommended five-year sentence. Post-conviction DNA testing revealed a partial male profile that excluded Wyatt, though the sample had degraded. The Innocence Project is now working with the District Attorney to have the indictment dismissed based on Wyatt’s innocence.