Reflecting on Ten Years of Freedom 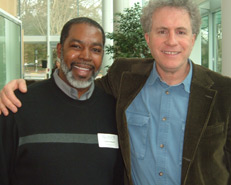 On June 15, 1999, all charges against Calvin Johnson were dropped and he walked out of a Georgia prison for the first time in nearly 16 years. A decade later, Johnson is happily married and has an eight-year-old daughter. He works as a supervisor for Atlanta’s public transit system and serves on the Innocence Project Board of Directors and the board of the Georgia Innocence Project, as well. He is the co-author of “

,” a book about his wrongful conviction and exoneration.

It was 1983 when Johnson’s nightmare began. Two women were raped in College Park, Georgia, and one of them misidentified Johnson in a photo lineup. Based largely on the eyewitness misidentification, he was convicted by a jury and sentenced to life in prison. He was acquitted on the other charge months later.

After his initial appeals were denied, The Innocence Project took on his case and obtained DNA testing which conclusively excluded Johnson as the perpetrator. Upon his release in 1999, Johnson became the first person in Georgia to be exonerated by DNA evidence. There have been

exonerated in Georgia since, all of them wrongfully convicted based in part on eyewitness misidentification.

ran in the Atlanta Journal-Constitution on June 15, 2009. In the article, he discusses the difficulty of adjusting to life outside of prison and his role in helping promote reforms that will prevent wrongful convictions.

Johnson helps his fellow exonerees deal with the enormous hassles of a post-prison life. He knows from experience what they’re going through.

He took a rental car to the driver’s license bureau, but was told (after waiting in line) that he couldn’t use that car to take his driving test. Instead, he turned to the stranger behind him in line and borrowed their vehicle. When he went for a fill-up his first time out in the free world, Johnson sat for a long time, waiting for an attendant, before he realized that gas stations had all become self-service….

…Johnson was 42 years old when his daughter was born, which is a late start on a family, but he doesn’t count time in a conventional way. “I might be 51 in numbers,” he says with a smile, “but I’m really 35. I was preserved. They had me on ice for 16 years.”

Johnson received the Innocence Project’s first Freedom & Justice Award in 2007, and spoke at the ceremony about the suffering he endured while wrongfully incarcerated and the slow process of rebuilding a life after release.

Watch a video of his acceptance speech here