Reevaluating Lineups: Why Witnesses Make Mistakes and How to Reduce the Chance of a Misidentification 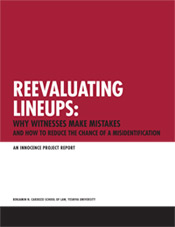 Eyewitness identification is among the most prevalent and persuasive evidence used in courtrooms. Eyewitness testimony that directly implicates the defendant is compelling evidence in any trial, but it is not error-proof. Jurors may not realize that confident, trustworthy witnesses can be mistaken. A single witness’s identification can be enough to obtain a conviction.

Eyewitness identification also plays a key role in shaping investigations. In the immediate aftermath of a crime, an erroneous identification can derail police investigations by putting focus on an innocent person while the actual perpetrator is still on the streets. Once a witness identifies the suspect to police, whether or not that person actually committed the crime, investigators may stop looking for other suspects.

Experts estimate that physical evidence that can be subjected to DNA testing exists in just 5-10% of all criminal cases.1 Even among that small fraction of cases, many will never have the benefit of DNA testing because the evidence has been lost or destroyed. DNA exonerations don’t just show a piece of the problem – they are a microcosm of the criminal justice system.

Decades of empirical, peer-reviewed social science research reaffirms what DNA exonerations have proven to be true: human memory is fallible. Memory is not fixed, it can be influenced and altered. After the crime and throughout the criminal investigation, the witness attempts to piece together what happened. His memory is evidence and must be handled as carefully as the crime scene itself to avoid forever altering it.

The Innocence Project identifies the common causes of wrongful convictions across DNA exoneration cases and has found eyewitness misidentification to be the leading cause.

• Over 230 people, serving an average of 12 years in prison, have been exonerated through DNA testing in the United States, and 75% of those wrongful convictions (179 individual cases as of this writing) involved eyewitness misidentification.

• In 38% of the misidentification cases, multiple eyewitnesses misidentified the same innocent person.

• In 50% of the misidentification cases, eyewitness testimony was the central evidence used against the defendant (without other corroborating evidence like confessions, forensic science or informant testimony).

• In 36% of the misidentification cases, the real perpetrator was identified through DNA evidence.

• In at least 48% of the misidentification cases where a real perpetrator was later identified through DNA testing, that perpetrator went on to commit (and was convicted of) additional violent crimes (rape, murder, attempted murder, etc.), after an innocent person was serving time in prison for his previous crime.

Many of these misidentifications could have been prevented, many wrongful convictions averted, and many additional crimes avoided if police had used more reliable lineup procedures. In recognition of this, procedural reforms have been developed by leading eyewitness psychologists and successfully implemented by criminal justice professionals. These reforms have a strong scientific foundation and have been embraced by leading national justice organizations including the National Institute of Justice and the American Bar Association.They include:

• Double-blind presentation: photos or lineup members should be presented by an administrator who does not know who the suspect is.

• Lineup composition: “Fillers” (the non-suspects included in a lineup) should resemble the eyewitness’s description of the perpetrator and the suspect should not stand out. Also, a lineup should not contain more than one suspect.

• Witness instructions: The person viewing a lineup should be told that the perpetrator may not be in the lineup and that the investigation will continue regardless of whether an identification is made.

• Recording: Identification procedures should be videotaped.

• Sequential presentation (optional): Lineup members are presented one-by-one (by a “blind” administrator) instead of side by side.

Several states, cities and towns have already adopted the reforms and found them to be cost-effective and easily implemented. The benefits are extensive and include reinforcing the integrity of reliable identifications as well as reducing the rate of misidentifications. Despite positive feedback from police departments where the reforms have been implemented and mounting evidence of the reforms’ effectiveness, the majority of jurisdictions have maintained the status quo. There are no consistent standards for identification procedures from state to state or even from one police department to the next. In fact, many police departments do not have written procedures for conducting identifications, so there is often inconsistency even within individual police departments. Now is the time for change. Misidentifications benefit no one: not the innocent defendants who face incarceration for crimes they didn’t commit, not the victims who are denied justice, not the police officers working to catch the real perpetrator, and not the public whose safety is jeopardized when real perpetrators remain at large.

This report provides a historical overview of how eyewitness misidentification came to be recognized as a leading cause of wrongful conviction, it examines the shortcomings of traditional eyewitness identification procedures, and it describes how simple improvements to procedures can alleviate the problem, with examples of cities and states across the country that have successfully implemented procedural reforms.