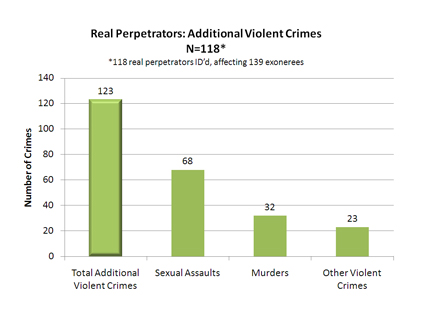 The Milwaukee Journal-Sentinel reported yesterday that Moses Price, Jr., who has been linked by DNA testing to the 1984 rape and murder of a 62-year-old woman, has been charged with the crime. Robert Stinson, a neighbor of the victim, was wrongfully convicted and imprisoned for 23 years based heavily on the erroneous testimony of a forensic dentist. In 1991, while Stinson was incarcerated, Price was convicted of an additional murder and is currently in prison for that crime.

The true suspects and/or perpetrators have been identified in 48% of the DNA exoneration cases. At least 100 violent crimes, including 32 murders, could have been prevented if the real perpetrators had initially been apprehended rather than an innocent suspect.