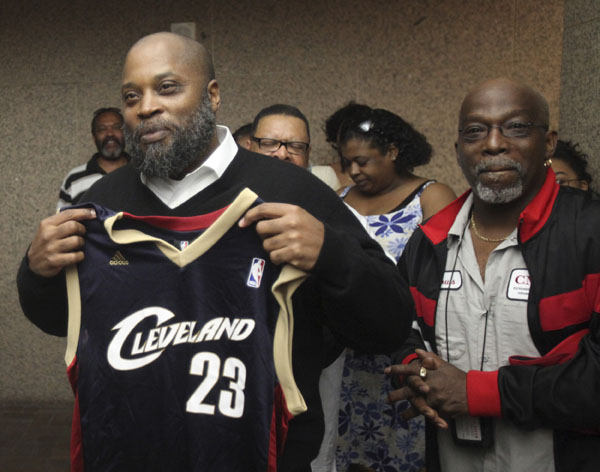 After walking out of an Ohio courthouse yesterday a free man for the first time in nearly three decades, Raymond Towler was joined by family, friends, advocates and fellow exonerees for a pizza lunch. He told reporters that he was planning to “”just take a deep breath and just enjoy life right now.”

DNA tests obtained by the Ohio Innocence Project proved Towler’s innocence of a 1981 rape for which he was serving life in prison. An Ohio judge choked back tears yesterday as she

. Watch video of his release below.

Towler is a big Cleveland Cavaliers fan, and his attorneys gave him a jersey of his favorite player, Lebron James, after he was freed. Shortly after being freed, he said: “I suppose hoping to see LeBron play in person is too much to ask, but at least I can watch the games from outside the barbed wire.”

That soon changed. The Cavaliers have offered Towler

to its playoff game Tuesday against the Boston Celtics. Even better, he’ll be invited onto the court during the pregame warmup. Until yesterday, Towler was watching games on a 13-inch TV in prison.

“The view will be a lot better,” said Tad Carper, a team spokesman. “We are happy, excited and humbled to give him a special night.”

Watch a Cleveland Plain Dealer video of Towler’s release below:

Man Freed After 29 Years for Rape He Didn’t Commit