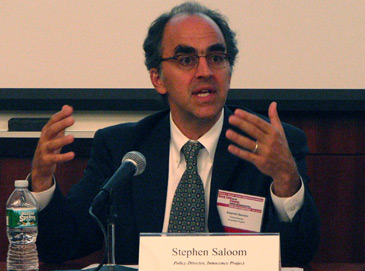 Are people of color more susceptible to be wrongfully convicted in the United States?

Speaking on a panel at law school conference last week, Innocence Project Policy Director Stephen Saloom (left) pointed to some of the ways minority groups face injustice in our system.

Wrongful convictions are caused by both systemic flaws in our criminal justice and by external variables, Saloom said, including subtle factors that subconsciously affect who we perceive as guilty or innocent and how people conduct investigations. These human factors mean race has an impact in our courts. “When considering stereotypes and the disproportionate minority contact in the system, we have a greater propensity to think people of color may have done something,” he said.

Cross-racial identifications have also played a role in sending a disproportionate number of people of color to prison for crimes they didn’t commit, Saloom said. Eyewitness misidentification is the leading cause of wrongful convictions overturned through DNA evidence, and in more than half of the misidentification cases, the witness and perpetrator were of difference races.

The total number of wrongful convictions overturned through DNA testing underline the racial disparities in our system; 254 people have been exonerated through DNA tests, and 172 of them have been black or Latino. Saloom was joined on the panel by the Hon. Theodore Jones, an Associate Judge for the Court of Appeals and the Co-Chair of the New York Justice Task Force and Bonnie Sard, Deputy Bureau Chief and Head of the Conviction and Integrity Program in the New York District Attorney’s office. The discussion was moderated by Vincent Doyle III, lawyer and president-elect of the New York Bar Association.

Sard spoke of the New York District Attorney’s new “Conviction and Integrity Program,” which among other things, has developed a process of reviewing claims of actual innocence and begun to enact new measures to ensure that the office operates with the “highest ethical standards.” One of these measures, inspired by Atul Gawande’s book “The Checklist Manifesto,” about how checklists revamped the medical profession, includes creating systematic checklists people must follow when reviewing eyewitness identifications.

Understanding the root causes of wrongful convictions – whether they’re systemic flaws or subconscious human factors – is critical to preventing these injustices in the future.