Putting the pieces back together: Illinois exoneree talks about his first year of freedom 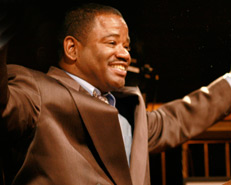 Jerry Miller spent nearly 25 years in Illinois prison for a rape he didn’t commit, and one year on parole as a registered sex offender, before DNA testing obtained by attorneys at the Innocence Project proved his innocence. On April 23, 2007, he became the 200th person exonerated by DNA testing in U.S. history. Yesterday, he spoke to a meeting of criminal defense lawyers in Champaign, Illinois.

"If you just be realistic about life, what in life is perfect?" the 50-year-old man asked a room full of defense attorneys. "Struggle makes character."

"The system is not perfect, and I'm a prime example of that," Miller told the attorneys. "I never gave up. You lose hope but you can't never give up."

Miller says it has been difficult readjusting to society after his release, but he’s getting on track now. He recently started attending a truck driving school to train for work as a driver.