Coalition of Exonerees and State Lawmakers Urge Gov. Cuomo to Sign Bill that would Establish Commission on Prosecutorial Conduct 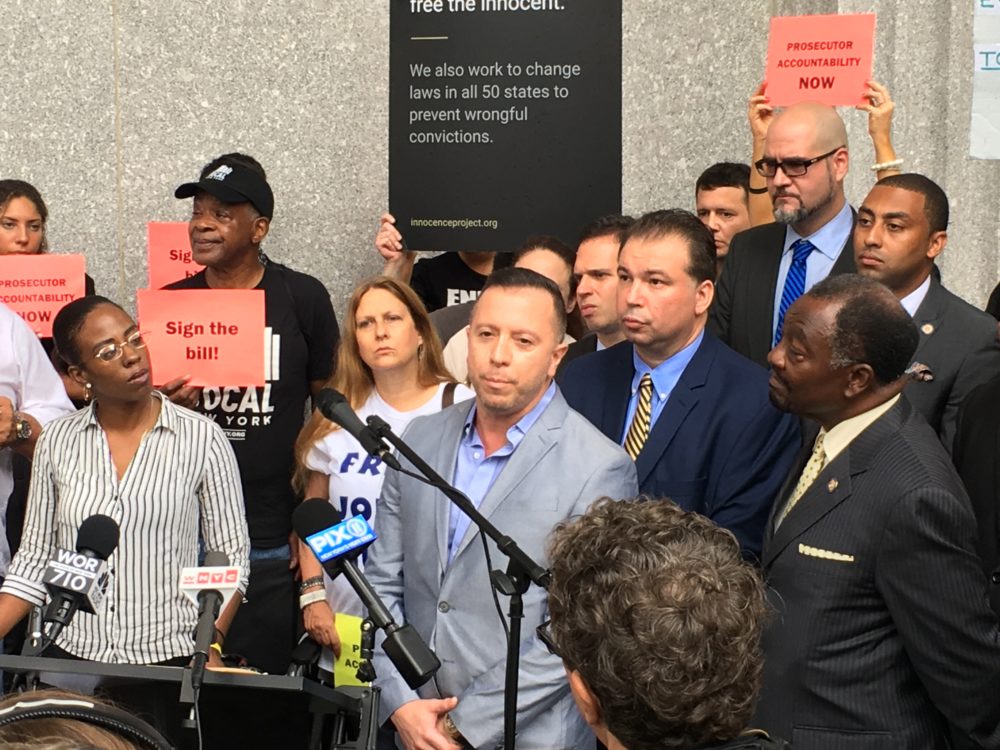 (NEW YORK) – Wrongfully convicted New Yorkers, who served a combined 83 years incarcerated due, at least in part, to prosecutorial misconduct; wrongfully prosecuted New Yorkers; Assembly Member Nick Perry; other lawmakers and officials; and representatives of a broad-based coalition of over 100 international, national, statewide and regional organizations, municipalities, unions, judges and lawyers urged New York State Governor Andrew Cuomo to sign legislation (S2412D/A5285C) that would establish a national precedent with the creation of an independent New York State commission on prosecutorial conduct. This legislation passed both houses of the Legislature with bipartisan support earlier this year. On August 8, the Senate delivered the bill to Governor Cuomo’s desk, giving him until August 20 to sign or veto it.

“As they battle to block the commission in recent days, district attorneys have attempted to minimize the impact of wrongful convictions by mingling in their conviction rate batting averages and implying to the public that wrongful convictions are simply a part of the price of the process. Tell that to the man who sits behind bars for 20 years for a crime he had nothing to do with. Tell that to his mother and father, wife and children. Explain how the innocent man is behind bars while the true criminal is out on the streets striking again. Explain that to the victims’ families. This argument must be repudiated for what it is — arrogant and cruel,” said It Could Happen To You Chair Bill Bastuk.

Creating a state commission on prosecutorial conduct will allow a fair procedure for the public to voice concerns regarding improper prosecution, lack of prosecution and selective prosecution.

Specifically, this legislation will allow the commission to:

Prosecutors have an extraordinary amount of discretion to investigate and prosecute charges. They have wide latitude in determining how to prosecute and whether to prosecute certain offenses against the accused. It is vitally important that a tribunal exist to oversee that discretion, to protect the rights of the accused and make certain that they are not violated.

This commission is modeled after the Commission on Judicial Conduct, a successful entity that exists for many of the same reasons, as judges too have wide discretion that must be examined to ensure individual rights are not being violated.

Five exonerated men and two wrongfully prosecuted shared their hope that New York could show leadership in this critical area. 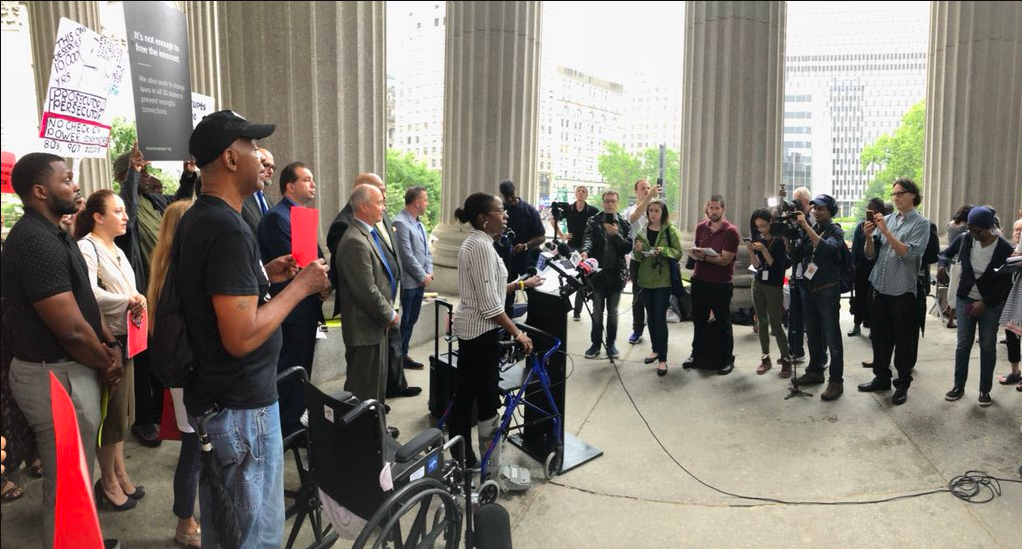 Senator John A. DeFrancisco said: “I urge Governor Cuomo to sign this critical criminal justice reform into law. Prosecutors have substantial power, and defendants, who go through the criminal justice system, and have been wronged by a prosecutor, must have an independent body to review the alleged conduct. This impartial venue for complaints would create checks and balances in the judicial system, just as the Commission on Judicial Conduct has provided oversight for judges for more than 40 years.”

“The opportunity to do the right thing has come for prosecutors in New York State who have functioned from the birth of our democracy with no system of checks and balance on their awesome power.  Governor Cuomo must sign this bill into law if we would like to maintain New York’s reputation as a progressive champion of justice. If this bill is vetoed, our state will continue to languish among the leaders in convicting the innocent, and we will be standing together with champions of injustice,” said Assembly Member Nick Perry.

“Legislation that would be first in the nation, legislation that is a model for the rest of the country. Yes, I believe the governor wants to be on the right side of history,” said City of Hudson Council Member Tiffany Garriga.

“By signing the bill into law, Gov. Cuomo will be saying to us exonerees, ‘Your lives matter. What happened to you is unacceptable, and we are committed to doing all we can to prevent future wrongful convictions. We exonerees need to be able to look back and say that our suffering and our families’ suffering counted for something,” said Jeffrey Deskovic, New York exoneree, who spent 16 years behind bars for a Westchester County wrongful conviction, and serves as the executive director of The Jeffrey Deskovic Foundation.

“Last year, New York had the fourth highest number of exonerations in the country–many due to prosecutorial misconduct–yet, there still remains no viable process for holding prosecutors accountable when they break the law and ruin lives,”said Tina Luongo, attorney-in-charge of the Criminal Defense Practice at The Legal Aid Society. “This could change if Governor Andrew Cuomo enacts S2412D/A5285C, legislation that would establish an independent commission to investigate prosecutors who pervert the rules and act in bad faith. It’s a crucial step toward preventing the incarceration of men and women who have wrongly been placed behind bars, and a way to prevent future misconduct. The Legal Aid Society urges the Governor to enact this law immediately.”

“The lack of authentic oversight when it comes to prosecutorial accountability stops at no state’s borders. A recent survey conducted by the Innocence Project in five diverse states over a five-year period identified more than 650 cases in which courts found prosecutorial error or misconduct and only one prosecutor was disciplined.  This legislation promises to make New York a national leader on this issue–to serve as a beacon to the rest of the nation on how to address this major contributor to wrongful conviction,” said Rebecca Brown, policy director at the Innocence Project, which is affiliated with Cardozo School of Law.

“Brooklyn Defender Services calls on Governor Cuomo to sign the Prosecutorial Conduct Commission bill immediately,” said Lisa Schreibersdorf, executive director and founder of Brooklyn Defender Services. “New York leads the country in overturned wrongful convictions, second only to Texas, and 25% of these wrongful convictions occurred in Kings County. We have seen 49 cases in Brooklyn alone involving misconduct by police or prosecutors. And yet the prosecutors responsible for these grave injustices have not faced consequences and their offices have not been called upon to make systemic changes. The first-in-the-nation Prosecutorial Conduct Commission will provide New Yorkers with a fair and transparent process to hold prosecutors accountable when they violate their duty to seek justice.”

“By signing this legislation, the governor can usher in a new era of ethics reform in our criminal justice system, and help New York become a leader in the fight for justice,” said Marie Ndiaye, senior policy manager at the Katal Center for Health, Equity, and Justice. “Too many people have been wrongfully prosecuted. Exonerees and their allies are working to ensure that what happened to them doesn’t happen to anyone else. The State Commission on Prosecutorial Conduct, which found broad bipartisan support in Albany, is vital to guarantee accountability at every step of our judicial system. The governor must take action now by signing this bill into law.”

“There is a growing public understanding, here in New York State and across the country, that prosecutors use and abuse their vast discretionary authority with almost no oversight and with virtual impunity,” said Nick Encalada-Malinowski, civil rights campaign director at VOCAL-NY. “Governor Cuomo has said he believes in reforming our criminal justice system, and today he has an opportunity to back-up his rhetoric with meaningful action that will provide a layer of protection to the hundreds of thousands of people prosecuted every year in New York State who currently cannot have any expectation that they will be treated fairly by state actors in criminal court.”