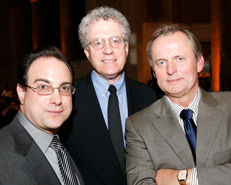 On Monday, October 20, Marty Tankleff (above left, with Innocence Project Co-Director Peter Neufeld and Author John Grisham) discussed the issue of wrongful convictions as a guest on the

Tankleff was released from a New York prison last year and officially cleared in July, after serving 17 years for the murder of his parents, a crime that evidence now shows he didn’t commit. The Innocence Project, which consulted with Tankleff’s legal team on his case, supports the recording of custodial interrogations to prevent future injustice. Electronic recording creates an objective record of what transpired during an interrogation – protecting innocent suspects as well as law enforcement officials, who can better defend themselves against allegations of coercion.

In July, Tankleff said a simple videotape could have saved him two decades in prison. "For 20 years, in my case, there have been two competing versions of what took place in the interrogation room," Tankleff said.

About 25% of wrongful convictions overturned by DNA testing involved a false confession or admission, and nearly all of these injustices could have been prevented. The electronic recording of interrogations, from the reading of Miranda rights onward, is the single best reform available to stem the tide of false confessions.

Read more about the recording of interrogations here