With New DNA Testing Proving Innocence, Philly Man Acquitted of Murder in Less Than An Hour After Retrial 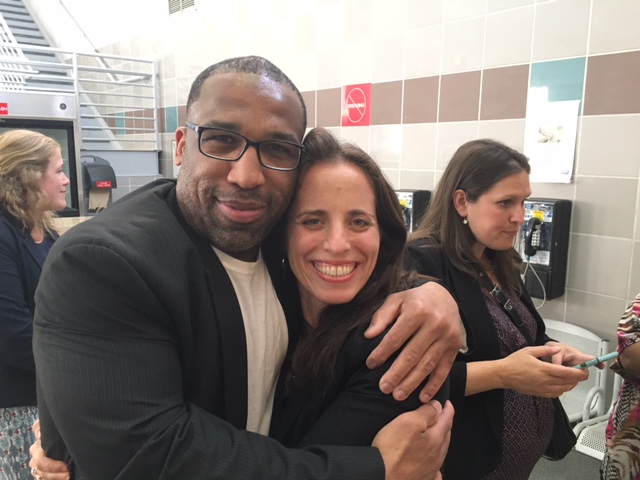 Anthony Wright hugs his attorney Nina Morrison moments after his release from prison on Aug. 23, 2016.

(PHILADELPHIA – August 23, 2016) After Innocence Project lawyers presented DNA evidence proving the innocence of Anthony Wright and pointing to the real assailant, a Philadelphia jury today acquitted Wright of the 1991 rape and murder of Louise Talley, becoming the 344th DNA exoneree in the nation. Wright wrongly served 25 years for the rape and murder. At the retrial, it was disclosed that DNA testing of clothing alleged by police to have been worn by Wright to commit the crime were not his and could not have been in his home as the police claimed.

“We are extremely relieved that this very long nightmare is finally over for Mr. Wright and his family. DNA testing proved not only that Mr. Wright is absolutely innocent but also that law enforcement fabricated evidence against him,” said Peter Neufeld, Co-Director of the Innocence Project, which is affiliated with Cardozo School of Law. “But it’s outrageous that he has been forced to endure a retrial to gain his freedom after DNA testing already proved his innocence. This case raises many serious questions, and Philadelphians should be deeply concerned about the manner in which law enforcement handled this case and should demand a review of three police detectives responsible for Mr. Wright’s wrongful conviction.”

At the retrial, it was revealed that since the DNA testing was conducted 3 ½ years ago that identified Ronnie Byrd as the real assailant, neither the Philadelphia Police Department nor the District Attorney’s office has conducted any additional investigation. The former district attorney fought efforts by the Innocence Project to conduct the testing for more than 5 years, eventually sending the case to the Pennsylvania Supreme Court, which remanded the case back to the district court for a hearing on the testing. The testing of the rape kit identified spermatozoa recovered from the victim’s vagina and rectum that excluded Wright as the source, and was then identified as Byrd’s. Byrd was twice the age of Wright and almost half the age of the victim at the time of the crime and had a long criminal record, which included crimes in and around Philadelphia. Byrd died in South Carolina in early 2013 and was never able to be questioned about the crime or prosecuted for it. DNA testing of the clothes police claimed were worn by Wright to the victim’s home the night of the murder demonstrate that the clothing did not belong to Wright but in fact had been worn by the victim.

Nina Morrison, a Senior Staff Attorney the Innocence Project, added, “Judging by the treatment that Mr. Wright has endured, the Philadelphia District Attorney’s Office has no intention of learning how this tragic miscarriage of justice occurred or how to prevent future injustice. While the Philadelphia police have a policy requiring the recording of interrogations, the state legislators should, at a minimum, enact a law requiring the recording of interrogations throughout the Commonwealth.”

Wright was originally convicted of the 1991 rape and murder of the 77-year-old North Philadelphia resident on June 8, 1993. Police claimed that after merely 14 minutes in custody, Wright voluntarily gave a full and complete signed confession to the crime. Wright, however, who was just 20 when he was arrested, has always maintained his innocence and testified in both the original and the retrial that he only signed the alleged confession, which the police wrote out, after the interrogating detectives threatened him with bodily harm.

All of the prosecution’s original trial witnesses, two of whom were admitted crack dealers, claimed that Wright committed the crime alone, saying either that they saw him enter the victim’s home alone or that he described his actions to them. Not only did the witnesses provide conflicting details, but most importantly, none of them mentioned anything about Byrd, the then 39-year-old convicted felon whose semen was identified by DNA testing on the vaginal and rectal swabs collected from the victim at autopsy.

Since the original trial, two of the witnesses passed away, but under Pennsylvania law, the prosecution was allowed to enter their earlier testimony into evidence without providing the lawyers the opportunity to question them regarding the new DNA evidence.  The prosecution was also allowed to enter the original testimony of three other witnesses, who where then teenagers and known to the police, after they testified at the retrial that they had no recollection of their earlier testimony.

Wright again testified in his own defense, telling the jury that he worked at his full-time construction job on the day of the crime and later went to a night club.

The jury deliberated for less than an hour before reaching its verdict.  Wright, who has now wrongly served 25 years for the crime walked out of the courtroom a free man.  He was surrounded by his family, which includes a son and a granddaughter.  At his original trial, Wright narrowly escaped the death penalty by a 7 to 5 vote of the jury.

“Philadelphia law enforcement has a lot of questions to answer following today’s verdict. This case should have never been put before a jury given all the evidence pointing to Mr. Wright’s innocence,” said Samuel Silver of Schnader Harrison Segal & Lewis LLP, co-counsel for Wright and Pennsylvania Innocence Project board member. “But we are relieved that justice has prevailed and Mr. Wright has been given back his life.”

A supporter of Wright has established a donation site for those wishing to make contributions.