Richard Lapointe with his legal team. (Photo: Courtesy of Centurion)

In Connecticut, Bobby Johnson was wrongfully convicted of murder largely because of police coercion. Mr. Johnson was just 16 and living with a developmental disability at the time he was interrogated by detectives for hours. Officials lied to him about having evidence that he committed the crime and told him he would face the death penalty if he didn’t confess. Despite the police having forensic evidence that pointed to Mr. Johnson’s innocence, detectives doubled down and interrogated him multiple times in order to coerce confessions to fit the evidence. 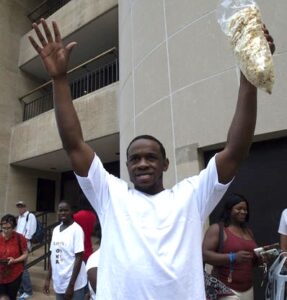 Bobby Johnson (photo from the National Registry of Exonerations).

Connecticut exoneree Richard Lapointe was wrongfully convicted of murder, kidnapping, and sexual assault. Despite living with a congenital brain impairment that impacted him both mentally and physically, he was interrogated for 9.5 hours. Detectives lied to him by saying they were going to lock up his wife, take his son away, and that his wife said he was involved in the crime. Sadly, Mr. Lapointe was coerced into giving three different confessions, none of which matched the facts of the crime and were even contradicted by forensic evidence.

Mr. Johnson and Mr. Lapointe were both victims of police deception, a tactic that allows law enforcement to lie to suspects about evidence and/or leniency they could provide in order to elicit confessions. Law enforcement experts have cautioned against the use of deception because of its known risk of causing false confessions and the availability of other, more effective, methods. However, the tactic remains legal in most of the county.

This campaign is in partnership with the Connecticut Innocence Project and the ACLU of Connecticut.