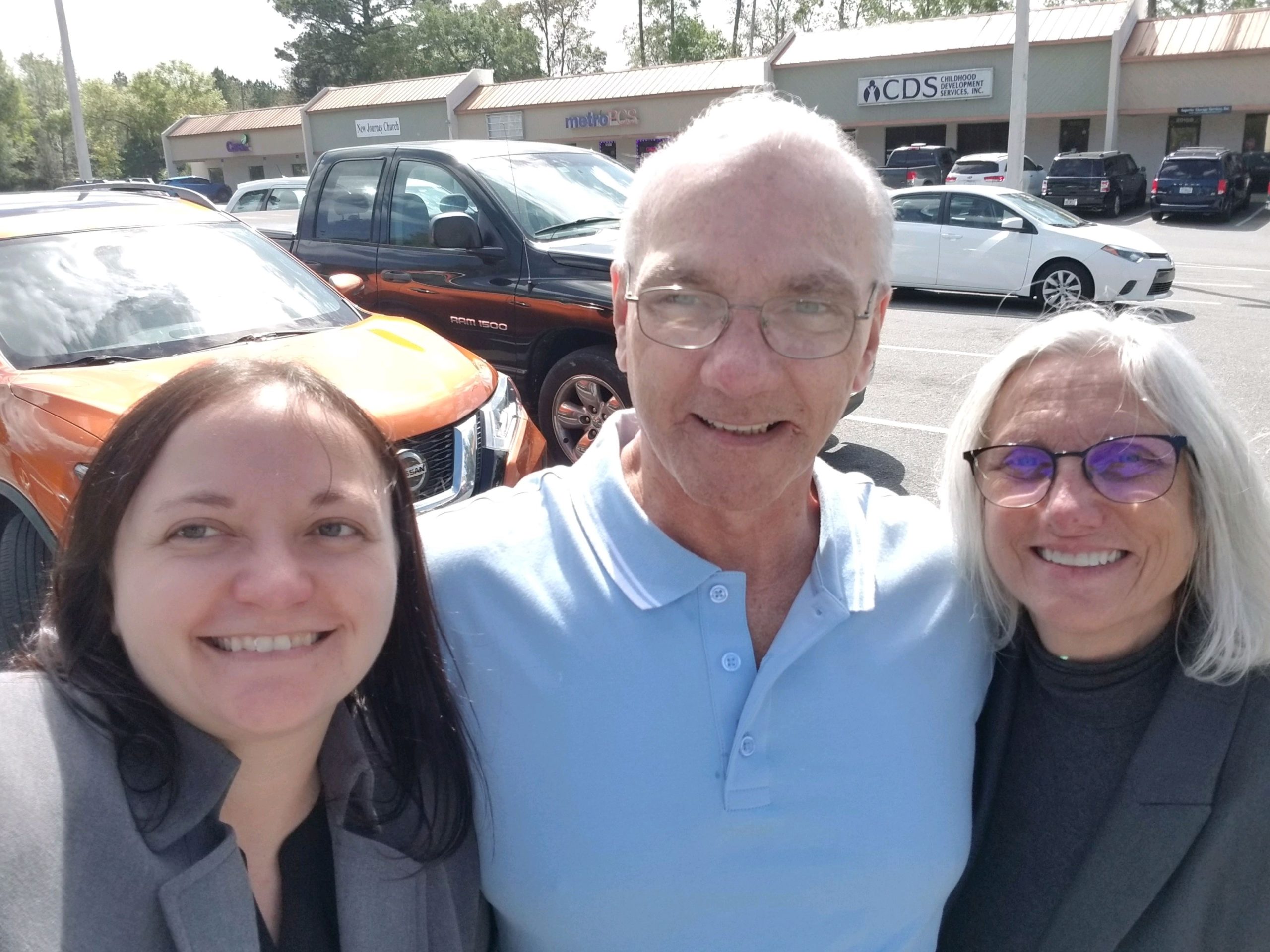 Paul Hildwin after he was released from prison with his team including Kate O'Shea (left), investigator, and Lyann Goudie (right) of Goudie & Kohn, P.A., who led the retrial team since 2014. Photo courtesy of Kate O'Shea.

(Hernando County, FL – March 9, 2020) — Today, Paul Hildwin accepted a plea agreement in a 1985 Hernando County murder prosecution to avoid a second death penalty trial, becoming a free man for the first time in nearly 35 years. The Court ordered Hildwin released with time served after he pled no contest to second degree murder, ending Hildwin’s long fight for justice — during which he spent nearly 30 years on Florida’s death row for a murder he always maintained he did not commit. He is expected to walk free from the Hernando County jail today.

Investigator Kate O’Shea and Lyann Goudie, one of Paul’s attorneys, were the first to welcome him into freedom. pic.twitter.com/HcAYAvhmyv

In 2014, while Hildwin was represented by Fort Lauderdale attorney Martin McClain and the Innocence Project, the Florida Supreme Court reversed Hildwin’s capital murder conviction and death sentence. The Court’s ruling was based on DNA testing and a court-ordered search of the national DNA database which proved that critical evidence originally used to tie Hildwin to the crime actually belonged to the victim’s estranged boyfriend, whom Hildwin had always contended was the likely true killer.

“Paul Hildwin’s unwavering determination to one day walk free enabled him to survive three and a half decades behind bars, during which he battled four bouts of cancer.”

Despite the Florida Supreme Court’s ruling that the new DNA evidence created reasonable doubt about Hildwin’s guilt that “would probably produce an acquittal on retrial,” prosecutors from the Fifth Judicial Circuit announced they would retry Hildwin — and would once again seek the death penalty.  The Innocence Project then recruited renowned Tampa criminal defense attorney Lyann Goudie to defend Hildwin at his retrial. Goudie tirelessly represented Hildwin for more than five years pro bono and, on the eve of his second death penalty trial, negotiated the plea agreement that set Hildwin free today.

While on death row, Hildwin — now age 60 — not only survived the State’s efforts to execute him, but also three separate bouts of cancer.  He suffered a fourth recurrence in March 2019, while awaiting retrial, but prosecutors still refused to drop the case. His cancer is now in remission.

“Paul Hildwin’s unwavering determination to one day walk free enabled him to survive three and a half decades behind bars, during which he battled four bouts of cancer,” said Nina Morrison, Innocence Project Senior Litigation Counsel, who helped represent Hildwin on his appeals from 2004 to 2014.  “It is outrageous that Paul was held in jail for five more years after the Florida Supreme Court ruled that the new DNA would likely lead to his acquittal. And while we hoped that he would be fully exonerated, we are thrilled that Paul will not spend another day behind bars or face another death penalty trial.”

An Innocence Project-Inspired Docuseries Is Coming to Netflix

An Innocence Project-Inspired Docuseries Is Coming to Netflix

Hildwin became a suspect in the 1985 murder after stolen property from a murdered Hernando County woman was found in his possession. When questioned, he told investigators that he had hitched a ride with the victim and her boyfriend several days earlier and admitted stealing property from the vehicle, but not committing assault or murder. He insisted that he left the victim with her boyfriend, with whom she had a volatile relationship, by the roadside after the two got into a heated argument and pulled the car over.

At trial, the prosecution presented a serology expert who falsely claimed that bodily fluids found on two pieces of crime scene evidence—women’s underwear and a washcloth—matched Hildwin. That evidence came from a FBI forensics expert who claimed that Hildwin was among only 11 percent of the world’s white male population who could have deposited the fluids. The expert also claimed that the fluids couldn’t have come from the victim’s estranged boyfriend.

In 2003, DNA testing excluded Hildwin as the source of semen and saliva found on the two pieces of crime scene evidence. For the next seven years, the Innocence Project fought prosecutors to submit the DNA profile into the CODIS DNA database to determine the source of the DNA. In 2010, the Florida Supreme Court finally ordered a DNA database search on the DNA profile, which was identified to the victim’s estranged boyfriend — an alternate suspect in the crime, who was convicted of 16 counts of sexual battery of a minor.

Hildwin was represented at his 1986 trial by Daniel Lewan, a court-appointed lawyer with less than three years’ experience and who had never tried a murder case. As his retrial loomed, Goudie filed numerous motions arguing that Lewan’s ineffectiveness, along with the death of at least twelve witnesses, made it impossible for Hildwin to receive a fair trial 35 years later.

“It is outrageous that Paul was held in jail for five more years after the Florida Supreme Court ruled that the new DNA would likely lead to his acquittal.”

In addition to the DNA test results, Hildwin’s lawyers on appeal also uncovered evidence of Hildwin’s innocence that was never turned over to the defense. The victim’s nephew and another witness told investigators they saw the victim alive nearly 12 hours after the prosecution claimed Hildwin had killed her, yet neither were called to testify during trial.

A large team of lawyers contributed to today’s outcome. They included Lyann Goudie of Goudie & Kohn, P.A., who led the retrial team since 2014; Terry Lenamon of Lenamon & Ortiz, P.A., a top capital lawyer who was appointed by the court in 2017 to handle the penalty phase of the retrial; Wade Whidden, Esq., Marie-Louise Samuels Parmer, Esq., and the law firm of Holland & Knight LLP, who each donated their time to assist the retrial team for more than two years after the Supreme Court’s ruling; investigator Kate O’Shea; and Martin McClain, Esq., who jointly represented Hildwin along with Nina Morrison of the Innocence Project in the litigation that led to the reversal of his 1985 conviction and death sentence.