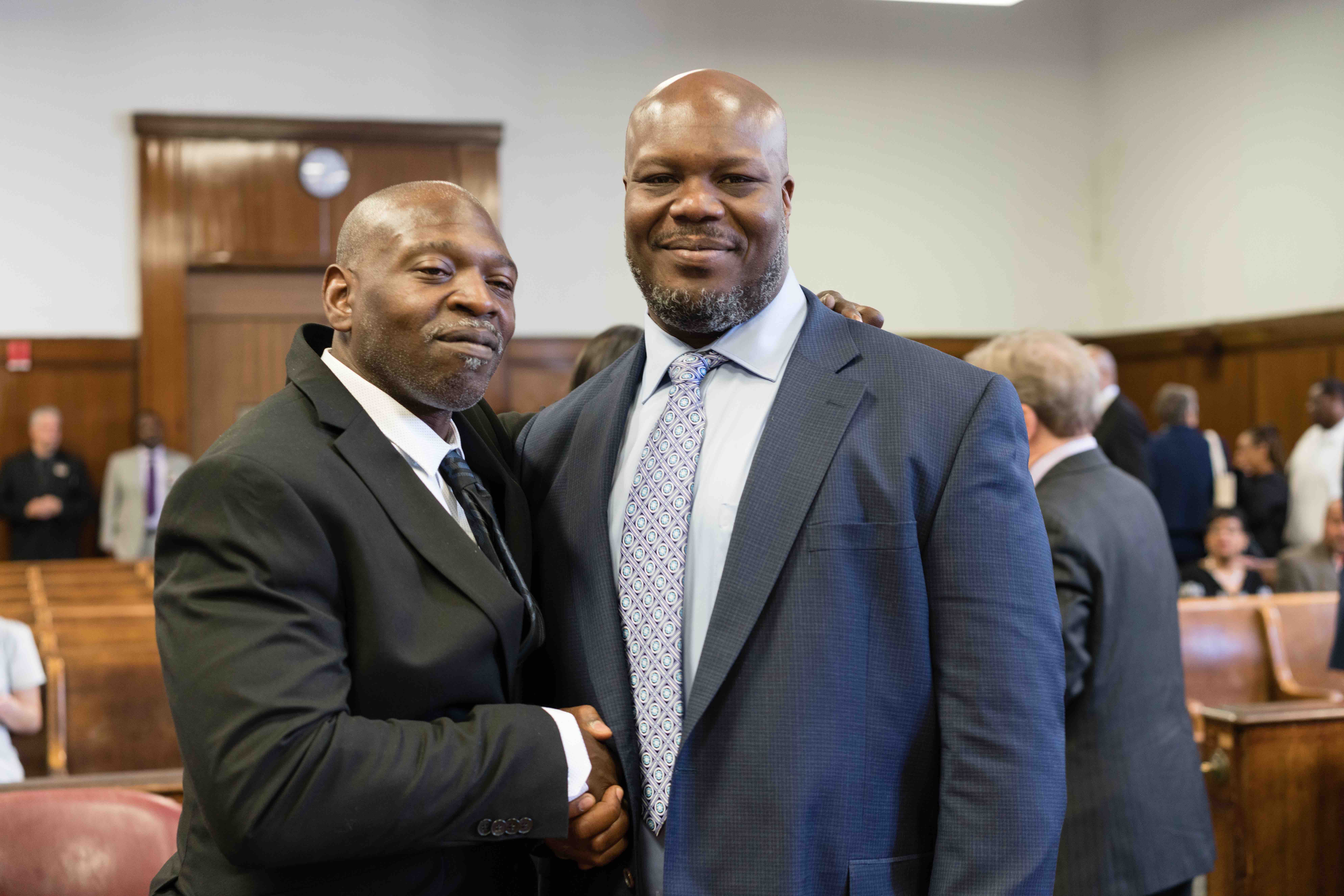 VanDyke Perry and Gregory Counts at their exoneration. Photo by Sameer Abdel-Khalek.

Today, the New York Daily News published an op-ed by NY1 News political anchor Errol Louis and host of Inside City Hall, focusing on a bill that just passed the New York state legislature and would establish an independent commission to review misconduct of prosecutors, creating a mechanism of accountability for their deliberate violations contributing to wrongful convictions.

This bill now awaits Governor Cuomo’s signature, making a much-needed commission to evaluate and punish prosecutors who, in Louis’ words, “pervert the rules” of a real possibility. Louis explains: “It’s a crucial step toward exonerating men and women who have been wrongly placed behind bars, and a way to prevent future misconduct. We’ve reached a point in New York City where it seems like someone is cleared nearly every few weeks, following a finding that a detective pressured a witness or a prosecutor illegally held back evidence.”

Just recently, a New York County Supreme Court judge vacated the convictions of Innocence Project client Gregory Counts along with his co-defendant VanDyke Perry after serving a combined 36 years in prison for a gang-rape the complainant acknowledged never actually occurred. DNA testing that identified another man’s sperm in the complainant’s underwear, which was stopped from being entered into evidence by the Manhattan District Attorney’s Office back in 1992, led to a joint reinvestigation between the Innocence Project, the Office of the Appellate Defender and the New York County District Attorney Office’s Conviction Integrity Unit. The reinvestigation revealed that law enforcement failed to fully investigate the case.

Louis points out, the cases of Counts and Perry along with so many others are prime examples of wrongful convictions that should be reviewed by a “desperately needed commission that will hold rule-breaking prosecutors accountable for putting the wrong person behind bars.”

The absence of consequences for violating basic rules of fairness is why New York remains the second-worst state when it comes to wrongful convictions.

To push for more timely and robust disclosure of evidence and fewer ethical violations, last November New York Chief Justice Janet DiFiore instructed judges to issue “Brady Orders” to prosecutors to disclose all evidence pointing to a defendant’s innocence at least 30 days prior to trial. Under the Chief Judge’s rules, which went into effect this year, prosecutors who willfully withhold exculpatory evidence can be held in contempt of court for failing to disclose exculpatory evidence, but an independent commission would establish a more formal and transparent process for prosecutors who fail to abide by their ethical obligations.

Louis added: “Good start, but the problem remains: Prosecutors rarely face personal or professional consequences for railroading innocent men into prison. The absence of consequences for violating basic rules of fairness is why New York remains the second-worst state when it comes to wrongful convictions.”

This legislation, which was sponsored by Senator John DeFrancisco (R-Syracuse) and Assemblyman Nick Perry (D-Brooklyn), has made it this far thanks to the hard work of the New York State Association of Criminal Defense Lawyers (NYSACDL); It Could Happen to You, led by Bill Bastuk; The Jeffrey Deskovic Foundation for Justice and exonerees including Jabbar Collins.