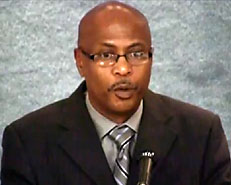 John Thompson, who was stripped by the U.S. Supreme Court of $14 million in civil damages for the intentional misconduct that caused him to spend 14 years on death row, will headline a symposium on prosecutorial oversight at the University of Texas School of Law in Austin on Thursday where panelists will discuss policy solutions for preventing misconduct and making prosecutors more accountable. Thompson will be joined by Texas exoneree Michael Morton, whose case will be the subject of an upcoming Court of Inquiry into possible prosecutorial misconduct.

Additional information about Thompson and the tour, including a live stream of the first panel discussion is