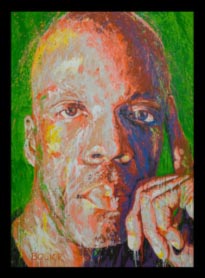 [Editor’s Note: Below is a guest post from Dan Bolick, whose solo exhibition “Resurrected” is currently on view at the Westmoreland Museum in Greensburg, Pennsylvania. In Part One of his post today, he writes about how he came to paint portraits of exonerees. Tomorrow, in

, he writes about the experience of getting to know the exonerated and the power of art to open people’s eyes to injustice. He is speaking about the project tonight at the gallery.

and details on tonight’s lecture are available by calling (724) 837-1500. At left is Bolick’s portrait of Drew Whitley, who was exonerated through DNA evidence after 16 years in prison or a crime he didn’t commit.]

I taught art for the inner-city Pittsburgh Public Schools for many years, and during that time I worked with many kids who wound up on the wrong side of the law.  Some got caught up in the legal system and found themselves being accused of petty crimes that they didn’t commit.  After being gone from my class for awhile they would return wondering “Why me?”  I tried to explain that the criminal justice system is not always fair, is somewhat broken and is simply best to be avoided.  I would tell them that sometimes the easy people to blame get fingered for crimes they didn’t commit.

The same kids would often get into trouble over and over again.  They were caught up in a viscous cycle and their crimes escalated as their anger over their situation increased.  During my final few years of teaching I saw more angry students than ever before.   Eventually the anger was directed at me, the school became a physically unsafe place to work, and I retired.

I became a full-time painter.  I attempted to paint that anger.  It was a cathartic experience for me.  Eventually, I was given the opportunity to have a solo exhibition of my paintings at The Westmoreland Museum of American Art in Greensburg, Pennsylvania. But what to paint? Having removed myself from the classroom and painted the angry portraits eliminated the tension that I had felt, I wanted to paint something that could help people.

I decided to focus on the wrongfully convicted, to help make ordinary citizens aware of this terrible problem in society.  I first reached out to several exonerees and got no response. But I wasn’t going to let the project die.  After a month went by I began to research the Innocence Project and similar organizations across the country and came across a play called “Voices of Innocence,” written by four death row exonerees in New Orleans.  I figured that if they had already turned their horrible experiences into art they would be more open to my project.  I was right.  They agreed to allow me to come down to New Orleans to meet with them.

I would eventually paint portraits of ten men who suffered the unimaginable injustice of wrongful conviction, and my exhibition is currently up at the Westmoreland Museum. In another post tomorrow, I will discuss the memorable experience of working with exonerees and my hopes to keep this project alive.