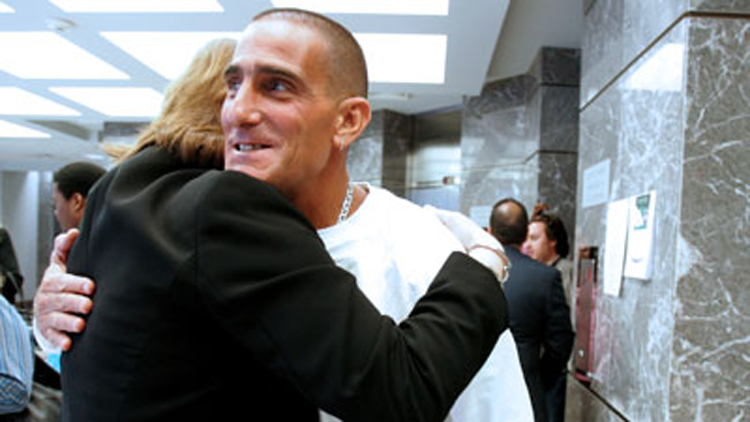 Anthony Caravella after he was exonerated on Thursday, March 25, 2010, at the Broward County Courthouse in Fort Lauderdale. Amy Beth Bennett, Sun Sentinel.

In 1983, Anthony Caravella was wrongfully convicted of rape and murder in Florida when he was just 16. His conviction was based on a false confession that was physically coerced by police during an interrogation that lasted for five days. The confession was not recorded. In 2010, Caravella was exonerated through DNA testing, and the following year Florida formed an innocence commission which called for law enforcement across the state to record all interrogations. But, sadly, as noted today in an Orlando Sentinel op-ed, the state has yet to act. The state Senate has taken steps to move a bill that would mandate recordings through the chamber. Unfortunately, the bill has not moved forward in the House.

Take action: Stand up for the innocent in Florida

Twenty-four states around the country require police to record interrogations from start to finish, and some law enforcement agencies in Florida do so voluntarily. But, the Sentinel points out that “in a state with more overturned death-penalty convictions than any other in America,” legislation requiring the best practice is a must.

And it’s not simply about distrusting cops.  . . .  After all, if the interrogation was done properly, then a recording denies the defendant the chance to claim it was coerced. “That argument becomes a nonstarter,” Perry said.

Republican Sen. Jeff Brandes, the Tampa Bay-area sponsor of Senate Bill 1220, says the law is overdue. “It’s 2018,” he said. “If we have standards for body cameras, we should have them for interrogations.”

Brandes also said the bill isn’t burdensome, applying only to the serious crimes — such as rape, murder, robbery, child abuse, stalking and other things that could put suspects away for long periods of time. And primarily to situations where suspects are in custody. You could actually make a case for stronger standards. But this is still a solid start.

Michelle Feldman, a lobbyist with the Innocence Project, said the recordings are good for everyone involved. “When you have them, there’s no dispute about what happened in the interrogation,” she said. “You just play the tape for the jury.”

Florida: We need your help right away to make sure the House of Representatives acts on House Bill 929 requiring police to record interrogations to protect innocent people. Contact Rep. Ross Spano + ask him to pls. schedule a hearing on House Bill 929: (850) 717-5059 pic.twitter.com/tSCtc1Mzhl