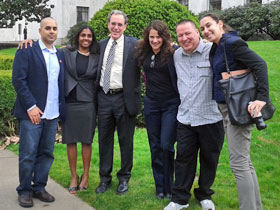 Exoneree Ted Bradford joined members of the Oregon Innocence Project yesterday at the Oregon state capitol to testify in favor of a bill which would expand the availability of DNA testing in the state.


House Bill 3206, sponsored by Democratic Representatives Jennifer Williamson of Portland and Ann Lininger of Lake Oswego, would allow a defendant to seek DNA testing for any relevant crime, not just murder or sex crimes. Under the new law, judges would also be required to put their reasons for denial of testing on the record.

The Oregon District Attorneys Association opposes the bill, saying it would allow for too many old cases to be challenged and would be too costly for the state.

Oregon was among the first states to adopt a DNA access law, but according to Oregon Innocence Project Director Steve Wax, it’s time for an update.

“We are suggesting that if there is any crime in which DNA evidence is relevant, testing should be available,” Wax told the

, Ted Bradford prefers to stay out of the public eye, but agreed to speak about his case as long as it enables other wrongly convicted Oregonians to access testing of evidence which could prove their innocence.

“If my story could help just one person out there who is wrongly convicted and sitting in prison right now with no hope — if I can reach that person in any way — it just makes it worth it,” he told reporters before a House Judiciary Committee hearing.

Bradford served 10  years in prison in Washington on a rape and burglary conviction. The Innocence Project Northwest took on his case in 2002 and in 2007 obtained testing of DNA evidence which excluded him from the crime. He was exonerated in 2010.