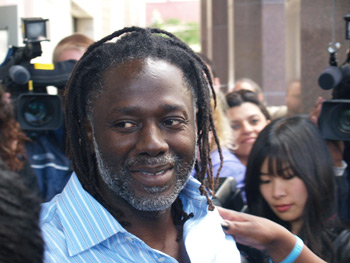 One year ago today,

walked out of a Detroit prison a free man for the first time in 26 years, exonerated of rape and robbery charges for which he had been wrongly convicted at age 21. Today, after one year of freedom, he speaks actively in support of reforms to prevent injustices like this from happening to anyone else.

Swift’s conviction in 1982 was plagued by numerous miscarriages of justice, including the use of flawed identification procedures by police, an inadequate court-appointed lawyer, and the exclusion of forensic evidence that could have helped show Swift’s innocence at his trial. Despite strong questions about his guilt, he was convicted and sentenced to 55 years in prison.

The Innocence Project became involved in Swift’s case in 1996, and would be working on it for over a decade. After an exhaustive search for DNA evidence from the case did not yield any results, lawyers and law students at the Innocence Project turned their attention to exposing other evidence that could help overturn Swift’s conviction. They obtained an affidavit reconfirming the alibi testimony of Swift’s former girlfriend, a law enforcement officer, and discovered that Swift’s attorney had engaged in misconduct in other cases. As this was uncovered, the police officer, the lab analyst and even the prosecutor in Swift’s original case all came forward to acknowledge Swift’s innocence and to help the Innocence Project overturn his conviction.

Swift was finally exonerated of all charges on May 21, 2008. Since his exoneration, he has been reunited with his daughter, Audrey Mills, who was only two years old when her father was wrongly convicted. In July, Swift traveled to Ireland with her and Innocence Project Co-Director Barry Scheck to visit Niamh Gunn, a student who had worked for the Innocence Project and continued her involvement with the case when she returned home. While there, Swift was featured on Irish national television and was able share his story with the public. Last month, Swift also appeared as a panelist at a forum sponsored by the Freedom Institute for Economic, Social Justice and Political Empowerment which addressed flaws in public defense.

Since Michigan still does not have compensation laws for those who are wrongfully convicted, Swift has not yet gotten anything from the state for of all the years he spent in prison. As with all the other injustices he has faced, Swift has not let this stop him from pursuing what is right. According to the

, Swift’s “goal in life now is to make sure what happened to him does not happen to other people”; as he says in his own words: ‘“I want to be prominent and active in legislative reform and help men and women like myself.”’ Swift may have wrongly lost many years of his own life in jail, but he is determined to spend these next years fighting to make sure that more innocent people do not end up behind bars.