One Year Out and Counting: Thomas McGowan Just Wants To Help Others 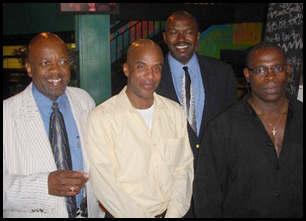 One year ago today, Thomas McGowan was officially exonerated in Texas after serving 23 years in prison for a rape and burglary he didn’t commit. The Innocence Project, which represented McGowan, obtained DNA testing in his case in 2008. The results proved that another person had committed the sexual assault for which McGowan had served more than two decades in prison.


Above, left to right, Texas exonerees

After his release, McGowan spoke with

about what it felt like to be a free man. He said: "It's the best high. It is. New life… It feels good to go down the street, I am not there at a place with barbed wire, and fences.” He was amazed by how much had changed since he had gone to prison, and remarked that “everything is new, a whole new world."

a blog he wrote on the Innocence Project’s website

after his exoneration, McGowan stated that he wanted to obtain a job because it would make him feel that “he had a full life.” He said he hoped to get a position where he could help people, like at a nursing home or a hospital.

He meets twice a month with others freed in Texas

after serving years for crimes they didn’t commit, to “hang out and talk” and provide support for one another.

Two weeks ago, McGowan and the rest of the group appeared at the courthouse to greet and offer assistance to the newest Dallas county exoneree,