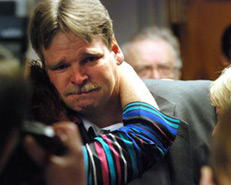 A year ago today, Steve Barnes walked out of an upstate New York courtroom a free man for the first time in more than two decades. Today, as the Utica Observer-Dispatch reports in a feature story, Barnes is building a new life and making the most of every day.

Barnes says he didn’t let himself become bitter over the past as he spent the past year discovering a new world beyond the gates of prison. He knows he’ll never be able to salvage the years he lost, but that hasn’t stopped him from making the best of every day he’s had since Nov. 25, 2008.

For Barnes, that’s meant earning a driver’s license, getting a job with Oneida County Workforce Development, getting his own apartment along River Road, starting a relationship, and just getting behind the wheel of his new Toyota Tundra truck to drive as far as he wants.

“The main thing is to just go out and do my own thing, and not be told what to do,” Barnes said.

Just like the song that has become Barnes’s favorite since being freed: Tom Petty’s “Free Fallin’.”

Then, with a snap of his finger, Barnes said, “This year went by like that.”

Barnes was convicted in 1989 in Oneida County, New York of a murder he didn’t commit, based on questionable eyewitness identifications, informant testimony and unvalidated forensics.

The Innocence Project began representing Barnes in 1993, the organization’s second year of existence, and secured DNA testing on his behalf in 1996. Unfortunately, DNA testing technology was still in its infancy and the results were inconclusive. It would be another decade before the Innocence Project reopened the case and obtained access to retesting. Y-STR tests, a newly developed technology, revealed a profile of the perpetrator, proving Barnes’ innocence.  Based on these results, his conviction was tossed out and he was freed November 25, 2008.