One Year Free, Already on His Feet 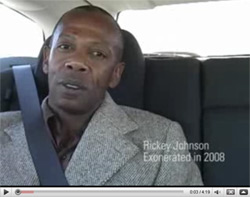 walked out of a Louisiana courtroom a free man for the first time in 25 years. In the photo above, he embraced his daughter on the morning of his release.

Today, he marked his one-year exoneration anniversary in a unique way: by opening a business. During his 25 years in Louisiana’s Angola prison, Johnson learned to be a master leatherworker; he now makes beautiful boots, clothing and accessories of all sorts. Today, he opened a leather goods store, RJ Leather Shop, in his hometown of Leesville, Louisiana. He plans to sell his creations in the shop and make special custom products for customers.

Johnson received $150,000 in state compensation in his first year of freedom. Although he acknowledges that no amount of money can truly compensate him for half of his life, he says the money helped him begin to get on his feet.

Almost all exonerees receive nothing immediately upon their release, and only those in 25 states are eligible for state compensation. Many struggle to rebuild their lives after they are freed.

Read more about life after exoneration, and Innocence Project’s work with our clients after their release, here