One Woman’s Triumph over Wrongful Conviction 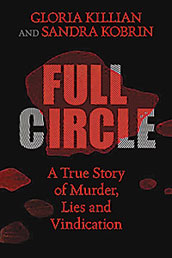 
Women have become one of the fastest growing prisoner populations, increasing over 800% in the last 30 years. Yet awareness about women’s wrongful convictions cases is just beginning to surface. Since DNA evidence seldom benefits women accused of crimes, their fight for exoneration takes longer, and they are rarely compensated. Gloria Killian’s story,

Full Circle: A True Story of Murder, Lies and Vindication

, (co-authored by Sandra Kobrin) addresses not only the unique struggles that wrongfully convicted women face—but also the need for improved conditions and civil rights for all female prisoners.

When Joanne Masse, wife of one of the perpetrators of a gruesome 1981 Sacramento robbery and murder, told police that someone named “Gloria” had planned the robbery, prosecutors fixed on Killian. Though he had already been convicted, Gary Masse testified against Killian after prosecutors promised him a reduced sentence. Killian, who had dreamt of becoming a lawyer, was sentenced to 32 years to life.

In prison, Killian established herself as a powerful advocate for prisoners’ rights at the California Institution for Women (CIW) in Chino. As a clerk in the law library, she assisted inmates with their appeals and sentence modifications. In collaboration with the University of Southern California, she helped create a law project to assist inmates in the women’s facility.

All the while, she had her own legal battle to wage. After years without a legal support network, she found Joyce Ride, mother of the astronaut Sally Ride, who firmly believed in Killian’s innocence and vowed to help release her. Ride hired a private investigator, and later an attorney who uncovered the key to Killian’s exoneration— a letter from the perpetrator, Gary Masse, to Sacramento County Deputy District Attorney Christopher “Kit” Cleland stating that Masse had “lied my ass off on the stand.” The letter, as well as other evidence of Killian’s innocence, had never been turned over to the defense. Cleland was ultimately disciplined for misconduct in the case.

Though Killian didn’t commit any crime and didn’t belong in prison, her experience is much like that of many other female prisoners at CIW. With Full Circle, she gives voice to their struggles and inhumanities as well. Readers learn that CIW prisoners breathe toxic fumes from a nearby chemical plant. The suffocating air caused Killian to become allergic and asthmatic within months of her arrival at CIW. Nevertheless, she quickly discovered not to depend on prison health care when she nearly died as a result of being administered two contraindicated medications that poisoned her kidneys.

Killian argues that some of her fellow inmates, though technically guilty, didn’t belong behind bars either. Fighting for the rights of domestic violence survivors and pregnant women and others, she channels her sense of powerlessness over her own plight into something positive. Since her exoneration in 2002, she has founded the

Action Committee for Women in Prison

which advocates for incarcerated women and works to release the unjustly imprisoned.

has just become available through

For a list of other books about wrongful conviction,