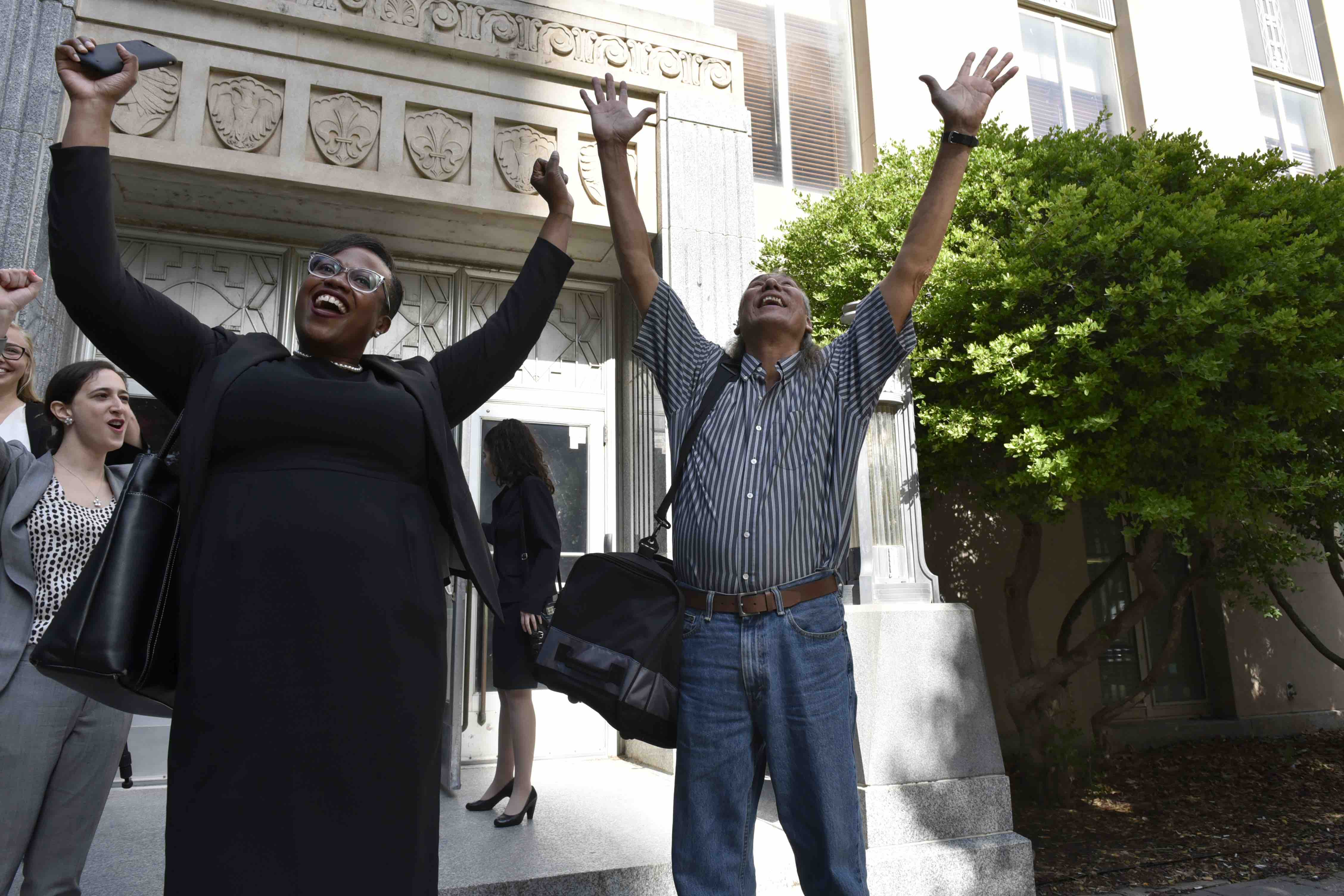 (Oklahoma City – June 11, 2018) With the consent of the Oklahoma County District Attorney, district court judge Glenn M. Jones vacated the 1992 murder conviction and dismissed the charges against Johnny Edward Tall Bear based on new DNA evidence proving his innocence. Tall Bear served 26 years for murder based on the erroneous statements of an alleged eyewitness who claimed to have seen Tall Bear fighting with the victim but later expressed doubts about his identification.

Support Tall Bear as he transitions home via his personal fundraiser

“We are grateful to District Attorney David Prater and Assistant District Attorney Jen Hinsperger for collaborating with us to secure DNA testing in this case, and for expeditiously moving to vacate Mr. Tall Bear’s conviction once the results were obtained,” said Karen Thompson, a senior staff attorney with the Innocence Project, which is affiliated with Cardozo School of Law.

“I’ve been saying for more than two decades that I didn’t have anything to do with this horrible crime. I’ve always known that I’m innocent and now the DNA has proved it.”

“The DNA proving Mr. Tall Bear’s innocence was pivotal to bringing an end to his wrongful incarceration.”

“I’ve been saying for more than two decades that I didn’t have anything to do with this horrible crime. I’ve always known that I’m innocent and now the DNA has proved it,” said Tall Bear.

Mr. Tall Bear, walking out of court a free man for the first time in 26 years. pic.twitter.com/BpMxzfIJoI

On October 3, 1991, the body of a homeless man, known as “Pops” (there was no identification on the body), was found on top of a pile of garbage near a deserted building in an area of Oklahoma City frequented by a homeless population. The man had been brutally stabbed and beaten. The pockets of his pants were turned inside out and had small bloodstains on them. Police also collected several pieces of torn up paper bag left on the ground near to the victim’s body that they believed had been used to “staunch a wound.”

On his second day of freedom, Johnny Tall Bear, one of the first Native people to be exonerated by DNA in the U.S., attended his tribe’s-the Iowa Nation-elders meeting where he received a warm welcome home. pic.twitter.com/B3CNnt3A8I

Tall Bear became a suspect after a man named Floyd Lewis (who was familiar with Tall Bear from the neighborhood) alleged to police that he witnessed two men fighting with a third man, who was lying on the ground. Lewis claimed that from the distance of a football field away, at dusk, he saw two men on their knees beating the victim. Lewis claimed that after he yelled at the men to stop, one of them stood up and, while “making Indian,” shook a cane. Seeing this, Lewis stated, “he knew it was Tall Bear.” It was based on this identification—and no other evidence—that Mr. Tall Bear was prosecuted and convicted.

Support Tall Bear as he transitions home via his personal fundraiser

At a preliminary hearing, Lewis stated, “I don’t think Tall Bear done it.” Nonetheless, Lewis went on to identify Tall Bear at his subsequent trial, testifying that he saw Tall Bear and another person fighting with the victim, although he was unable to identify the second assailant.

“The DNA proving Mr. Tall Bear’s innocence was pivotal to bringing an end to his wrongful incarceration.”

At trial, the state also relied on the testimony of discredited forensic analyst Joyce Gilchrist, who, as was revealed in a preliminary study conducted by the FBI in 2001, made outright errors or overstepped “the acceptable limits of forensic science” in at least five of her cases, leading to a comprehensive review of thousands of cases handled by her as a state forensic analyst between 1980 and 1993 by former Governor Frank Keating. Gilchrist performed basic serology (blood type testing) and claimed to have found four different blood types at the scene. While she acknowledged that Tall Bear didn’t match any of these blood types, her conclusion that there were four blood types called into question whether the blood was related to the crime (as there were only two assailants) and diminished the significance of Mr. Tall Bear’s exclusion from the blood types found at the scene.  The district attorney stood by the strength of the eyewitness identification and argued that while “the forensic evidence did not tell us very much … There’s evidence of several different blood types and enzyme activity.”

Despite the fact that there was no physical evidence linking him to the crime and that Mr. Tall Bear’s physical therapist testified he had recently undergone surgery to remove gangrene from his leg, making “walking very difficult,” confining him to a wheelchair and rendering him unable to walk distances, kneel or stand for long periods of time, the jury found him guilty and he was sentenced to life without parole, a sentenced later modified by the Court of Criminal Appeals to life imprisonment.

Tall Bear, who always maintained his innocence, sought the help of the Innocence Project. With the consent of the Oklahoma County District Attorney’s Office, the Innocence Project conducted DNA testing on the bloody bags that police believed were used to stop bleeding and blood found on the inside out pockets of the victim’s pants. The testing identified DNA belonging to the one unknown male in blood found on two pieces of the collected bags and DNA belonging to another unknown male in the blood found on the victim’s pockets.  Tall Bear was excluded from all of the profiles. DNA testing also revealed that Gilchrist’s serology results were, once again, false; she had incorrectly attributed blood from an unknown male to the victim and from the victim to an unknown male. Aside from the victim, only two blood types were found on the crime scene evidence, consistent with the eyewitness’ account.

An “End of the Trail” taco (brisket, scrambled eggs, potatoes, cheese sauce and potatoes) is Johnny’s first meal free. I asked him if it was tasty. “It ain’t no prison food!” @innocence #exonerated pic.twitter.com/v3fZS9f0Ku

Based on these results, the District Attorney’s Office agreed to join our motion to vacate the conviction which was granted today and to dismiss the indictment against Tall Bear, allowing him to regain his freedom for the first time in 26 years and advancing the cause of justice.

Eyewitness misidentification is a leading contributor to DNA-based exonerations. District Attorney David Prater and Oklahoma City Police Chief Bill City have taken the lead in implementing evidence-based practices that reduce the risk of eyewitness misidentification in Oklahoma City. To prevent these types of injustice, other jurisdictions across the state should follow their lead.