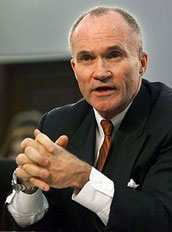 The NYPD joins over 800 other jurisdictions that have voluntarily adopted the policy. Under Kelly’s new proposal, New York City will become the biggest law enforcement agency in the country to undertake video recording. As an expansion of the NYPD’s 2010 pilot program, every precinct in the city will now record entire interrogations in murder, assault and sexual assault cases. Across the state, more than two-thirds of police departments require officers to tape interrogations, according to the state’s Division of Criminal Justice Services.

Still, it is unclear whether the NYPD will video record only those interrogations that occur after an arrest, or all qualifying custodial interrogations. Reuters writes:

Stephen Saloom, the policy director for the Innocence Project at Yeshiva University’s Cardozo School of Law, called the proposal a “good first step” but said that all custodial interrogations, not merely those that come after arrest, should be videotaped to prevent false confessions.

A growing awareness about the risk of false confessions has motivated jurisdictions and states nationwide to adopt the reform. Eighteen states and the District of Columbia now mandate that certain felony interrogations be recorded in their entirety, from the reading of the Miranda rights onward.

Here’s an excerpt of Kelly’s statement:


“Recording can aid not only the innocent, the defense and the prosecution but also enhance public confidence in the criminal justice system by increasing transparency as to what was said and done when the suspect agreed to speak with the police. Furthermore, electronic recordings may help lessen the concern about false confessions and provide an objective and reliable record of what occurred during an interview. As the task force also notes, this prevents disputes about how an officer conducted him or herself or treated a suspect.”