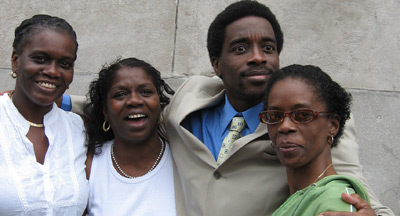 spent over a decade searching for the physical evidence from his case. When it was finally found— right where it was supposed to be all along — Newton had spent 20 years in prison for a crime he did not commit. He was finally exonerated two years ago yesterday.

Thanks to the Thurgood Marshall Scholarship Fund and the support of Moët Hennessy USA, Newton is able to celebrate the second anniversary of his exoneration as a college graduate. He graduated with honors from Medgar Evers College with a degree in Business this June. Now, he plans on going to law school to give back to his community.

Newton’s case is among many where adequate preservation of evidence could have freed an innocent person much earlier – if at all. To date, 27 states across the country have no laws or statues requiring evidence preservation — including New York, Newton’s home state. Even states that have statutes are not without their problems. Some states require preservation only for certain crimes. Others do nothing to sanction those responsible for destroying or discarding evidence.