North Carolina Man to be Released 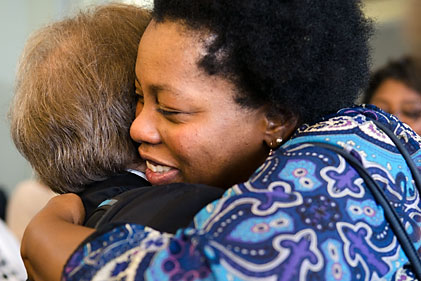 Darryl Howard waves to his family and legal team after the hearing. Photo credit: Sameer Abdel-Khalek


Six weeks after Superior Court Judge Orlando Hudson reversed Darryl Howard’s convictions for the 1991 murder of a mother and her daughter based on new DNA evidence and prosecutorial misconduct, Hudson said at a bail hearing today that he plans to free Howard on unsecured bond. Howard couldn’t be released from the court room today because of a temporary stay issued by the court of appeals at the request of the prosecution, but the Innocence Project is working to have the stay lifted.

In May, Hudson found that prosecutor Mike Nifong, who was disbarred and held in contempt for his actions in the Duke Lacrosse case, violated Howard’s constitutional rights by failing to turn over the exculpatory evidence and soliciting false and misleading testimony from the lead detective in the case.