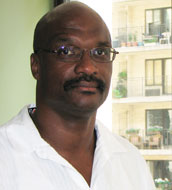 Two weeks ago, New Jersey exoneree Byron Halsey shared his wrongful conviction experience with lawyers and law students at a symposium about false confessions sponsored by the Temple Law Review and the Pennsylvania Innocence Project.

Halsey spent 19 years in prison for two 1985 child rape and murders before DNA proved his innocence. Halsey, who was helping to raise the children, was interrogated by police for nearly two days straight before he falsely confessed to committing the crimes.

Halsey, then 24, spent 30 hours undergoing intense interrogation during which he was lied to by detectives who told him he failed a lie-detector test, reported the


Halsey said he maintained his innocence but ultimately “I just got tired. They weren’t listening to what I had to say. I said, ‘Just give me the paper and I’ll sign it.’”

“I just wanted to get out of there,” Halsey said. “I feared for my life. After so many hours, I signed.”

DNA exonerations have proven that aggressive law enforcement tactics can cause innocent people to confess to crimes they did not commit. In approximately 25% of the wrongful convictions overturned with DNA evidence, defendants made false confessions, admissions or statements to law enforcement officials.

According to Halsey, prosecutors and detectives ignored his insistence of innocence and he was coerced into signing a statement he did not even write.


“They didn’t care,” Halsey said. “It was about getting a conviction because society wanted a conviction.”

Halsey started writing letters explaining what happened to him and asking for help. One caught the attention of the Innocence Project who was able to secure DNA testing on crime scene evidence. The results proved Halsey’s innocence and implicated another man who was already in prison for three separate sex crimes.

Today, Halsey works at Newark International Airport, a job he was offered shortly after he was freed from prison, and visits with his five children and 11 grandchildren. He has a civil suit pending against the officials involved in his arrest and prosecution but says he still has faith in the criminal justice system.


“Play the game right,” Halsey told the audience. “The system is beautiful. It’s just the people in the system. If you want to be a prosecutor, a judge, a police officer, just play the game right.”