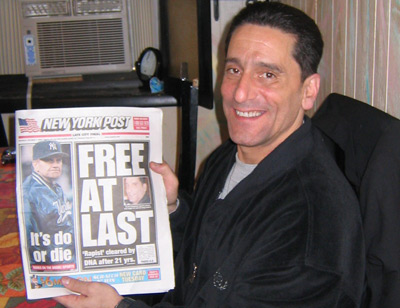 After spending two decades in prison for a crime he didn’t commit,

was exonerated on October 6, 2006. Tuesday marked his two-year anniversary.

Fappiano was convicted of a Brooklyn, New York, rape in 1983 and sentenced to 20-50 years in prison. The victim of the crime was the wife of a New York City police officer, and the officer witnessed the attack. While the victim identified Fappiano in a photo lineup and a subsequent lineup, the officer identified one of the lineup “fillers” as the perpetrator. (Fillers are the lineup participants who are not suspects.)

Fappiano was granted access to DNA testing in 1989, four years after he was convicted, but tests at the time were inconclusive. The Innocence Project accepted his case in 2003, and secured more advanced testing. The tests, conducted in 2005, proved that Fappiano could not have been the perpetrator. Greeting his family after his conviction was vacated in October of 2006, he said, "I missed having a family. I feel like I never left. Maybe I'm in shock. I feel like I could go on like tomorrow is just another day."


Find out if your state requires the preservation of evidence

Other Exoneree Anniversaries This Week