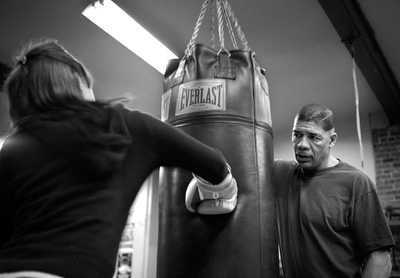 Dewey Bozella will be presented with the 2011 Arthur Ashe Courage Award during the ESPY Awards live on ESPN on Wednesday, July 13. With the help of the Innocence Project and represented by lawyers at WilmerHale, Bozella was exonerated in 2009 after serving 26 years in New York prisons for a murder he didn’t commit.

Bozella took up boxing while behind bars and eventually became the light heavyweight champ of the prison and even got the opportunity to fight a Golden Gloves champion.

“We are extremely proud that Dewey is being recognized for the incredible courage he displayed during and after the horrible injustice he suffered,” said Peter Neufeld, Co-director of the Innocence Project, which is affiliated with Cardozo School of Law. “Being wrongfully convicted is one of the most difficult challenges that one can face, yet Dewey not only survived this heartbreaking ordeal, but came out of it with humanity and generosity of spirit that is hard to match.”

Bozella was initially arrested for the 1977 burglary and murder of a 92-year-old woman shortly after her attack, but the charges were dropped because there was no evidence linking him to the crime. He was rearrested for the crime 6 years later after 2 inmates, who were released from prison for their cooperation, told prosecutors that Bozella committed the murder. Bozella was convicted based solely on the strength of the informants’ testimony.

The Innocence Project accepted Bozella’s case in 2007, before learning that all biological evidence had been destroyed and DNA testing was impossible. The case was refered to WilmerHale law firm in 2008, and a team of lawyers uncovered convincing evidence that Bozella was innocent and that another man likely committed the crime.

Read more about the award on ESPN.com