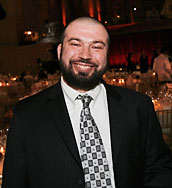 Exonerated in 2006 after over 15 years of false imprisonment, Jeffrey Deskovic has recently launched the Jeffrey Deskovic Foundation for Justice, with money from his wrongful conviction settlement. The Journal-News reports:


“In addition to bringing about exonerations in DNA and non-DNA cases, seeking legislative changes to prevent wrongful convictions and raising awareness, we will also be seeking to help exonerees reintegrate back into society and assisting parolees make a transition to a crime-free life,” he said.

As a student at Peekskill High School in Westchester County, Deskovic was wrongfully convicted for the murder of a classmate. DNA evidence secured by the Innocence Project later proved Deskovic’s innocence and implicated the real perpetrator, a convicted killer.

The factors leading to Deskovic’s unjust conviction were carefully reviewed by Westchester District Attorney Janet DiFiore who recommended a number of wrongful conviction reforms, such as recording interrogations, in order to prevent similar injustice.

Read Janet DiFiore’s report on the