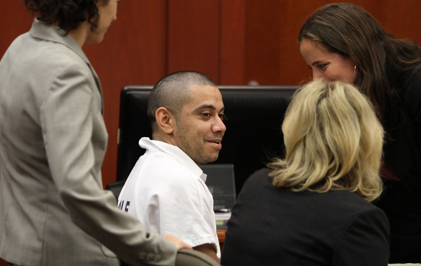 New DNA testing reveals the innocence of a man on Florida’s death row and points to a family member of the victims as the likely perpetrator. At a hearing that begins today in Sanford, the Innocence Project and lead counsel for Clemente Javier Aguirre-Jarquin will present compelling new evidence for overturning his conviction.

Aguirre was sentenced to death in 2006 for the murders of his neighbors, Cheryl Williams and Carol Bareis, a mother and daughter who were found stabbed to death in their trailer in Seminole County on June 17, 2004. An undocumented Honduran, Aguirre initially told the police that he didn’t know anything about the murders. Later the same day, however, he admitted that he had discovered their bodies at approximately six a.m. when he went to the house hoping to get some beer. He panicked and didn’t report the crime because he feared deportation.

At trial, the prosecution presented DNA evidence to show that the victim’s blood was on Aguirre’s clothes, shoes and the bloody knife. However, no testing was conducted on the more than 150 bloodstains that were photographed and swabbed from the crime scene.

In August 2011, Aguirre’s counsel at the

, in consultation with the Innocence Project, sought DNA testing of some of the previously-untested evidence. Most matched the two victims, but there were eight bloodstains that matched to William’s daughter (and Bareis’ granddaughter) Samantha Williams who has a history of violence and mental illness.

According to the Orlando Sentinel, prosecutors oppose Aguirre’s attempt to overturn his conviction and in a prepared statement, State Attorney Phil Archer said, “These are extremely important questions that need to be fully explored in open court.”