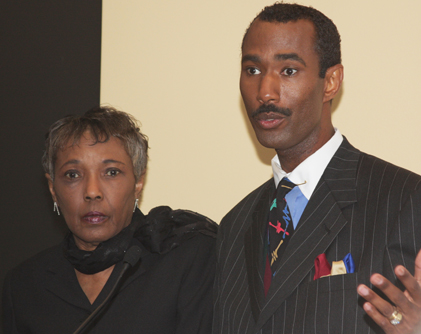 Above: Ruby Session and her son Cory Session, family to the late Tim Cole.

Cole died in prison in 1999 and was proven innocent through DNA testing a decade after his death. The victim, Michele Mallin, who has since become a criminal justice reform advocate, misidentified Cole as her attacker after viewing a suggestive lineup. Cole’s family fought for years to clear his name and make him Texas’ first posthumous DNA exoneration. They have since helped achieve a number of criminal justice reforms to prevent wrongful convictions and assist the exonerated.

Cole’s brother, Cory Session, now the Policy Director of the Innocence Project of Texas, and his mother, Ruby Session, were instrumental in helping to pass police lineup reforms in the Texas Legislature last year.


While there is still a lot of debate around which methods will lead to fewer faulty identifications, many researchers agree that the most important part of the process is who conducts the lineup and how the photos are presented.

Traditionally the detective or officer working the case shows the lineup. The Session family says the detectives working the case “steered” Mallin towards choosing Cole. “The police had tunnel vision,” Cory Session told NBC’s Josh Mankiewicz in an interview scheduled to air Wednesday night on Rock Center. “They’re going to make it fit no matter the circumstances surrounding the whole case.” The Lubbock Police Department maintains that at the time they were following standard protocol.

Read the full article and

watch a clip of the segment

that the Innocence Project advocates.