My Marathon for the Innocence Project 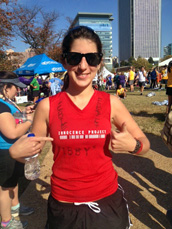 
After an eight-hour bus ride and five hours of sleep, I was less than enthusiastic about running the Richmond Marathon. I woke up exhausted, still fighting a serious cold, and wondering why I had traveled all this way to run 26.2 miles. It was when I started dressing for the race and put on my “Innocence Project” jersey that I clearly remembered my motivation.

on November 4th, but due to Hurricane Sandy, it was canceled. My friends and family urged me to run another marathon in the coming weeks because I had “trained so hard” and “put in a lot of time,” but those were not, ultimately, the reasons I decided to run.

I’m an amateur runner and this was my first marathon, so I really had no idea what to expect. The first fifteen miles were enjoyable, but I hit the infamous runner’s wall at mile sixteen. Honestly, I think I might have quit had I not been representing the Innocence Project, an organization I strongly admire and a cause I am passionate about. I kept focusing on the tremendous support I received from my co-workers and from all those who donated to our inaugural Innocence Project team.

When I became especially fatigued, I would look down at my hand where I had written two words that I knew would motivate me:

. George spent almost 30 years in prison for murder and rape, despite overwhelming evidence of his innocence. Every time I considered stopping, I thought about George and was humbled by his incredible determination. My marathon was a mere 26.2 miles; George’s was 30 years of fighting for his life.

Many people have asked me whether it was ultimately a letdown running my first marathon in Richmond after having physically and mentally prepared for the NYC Marathon. But my first marathon was not about where I ran, or who was watching me, or what my time was – I will always remember my first marathon as the marathon that I ran for the Innocence Project, and I could not ask for a better memory.