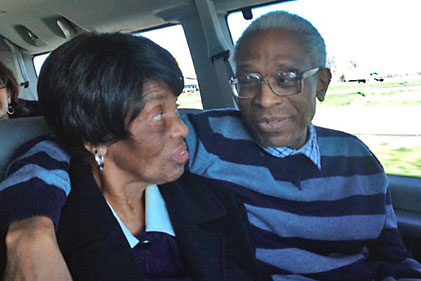 Photo: George Allen with his mother, Lonzetta Taylor, shortly after his release from prison.


Today a Missouri appeals court cleared the path for Innocence Project client George Allen’s full exoneration. The court dismissed an appeal filed by the Missouri Attorney General Chris Koster to a lower court ruling that had overturned Allen’s conviction for rape and murder because the state failed to turn over evidence pointing to Allen’s innocence. The ruling should finally bring an end to Allen’s 30 year struggle for justice. Koster issued a statement on November 8, saying that he would not further appeal the case if he lost in the Court of Appeals. St. Louis Circuit Attorney Jennifer Joyce also announced in November that she would not retry Allen for the crime. Today the appeals court asked that Joyce formally restate her intentions as to whether to retry Mr. Allen.

Allen was convicted of the 1982 rape and murder of a St. Louis court reporter based largely on what we now know was a false confession. Police originally arrested Allen by accident, mistaking him for another suspect. Even though they eventually realized their mistake, the detectives decided to interrogate him anyway. On the recording of the interrogation, Allen, who is a diagnosed schizophrenic, informs the officers that he is under the influence of alcohol. Throughout the interrogation the detective prompts Allen to give him answers to fit the crime, often asking Allen to change his answer to do so. One of the interrogating officers has since conceded the confession was questionable.

Allen’s legal team secured new DNA evidence and uncovered other previously undisclosed evidence proving Allen’s innocence, including police and lab documents showing that semen samples excluded Allen and the victim’s consensual sex partners as the source before he was even tried for the case.

You can read the full press release