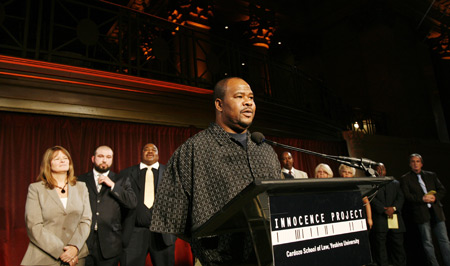 The exonerations of two Mississippi men in recent months have prompted the state Legislature to adopt major criminal justice reforms this year. Kennedy Brewer (above) and Levon Brooks each spent 15 years behind bars for crimes they didn’t commit. They were each convicted of raping and murdering three-year-old girls in Noxubee County in two separate but nearly identical crimes. Brewer spent seven of his 15 years on death row. In February 2008, DNA testing proved Brewer’s innocence and implicated the real perpetrator, Justin Albert Johnson, who then confessed to crimes in both the Brewer and Brooks cases. Both men celebrated their first year of freedom this spring.

Read more about their cases here

In the wake of these exonerations, the Mississippi Legislature acted quickly to bolster public confidence in the state criminal justice system. In order to give other wrongfully convicted prisoners legal recourse to prove their innocence, the Legislature passed bills allowing prisoners to petition for post-conviction DNA testing. On March 16, Governor Haley Barbour signed those bills into law, making Mississippi the 46th state to adopt such legislation. The Mississippi law also requires law enforcement agencies to preserve biological evidence as long as a case is unsolved or a convicted defendant is under state supervision in connection with the case.

On March 31, Gov. Barbour also signed a law that will provide compensation for the wrongfully convicted. Twenty-five states and the District of Columbia already have such a law on the books. The Mississippi law will provide $50,000 for every year of wrongful imprisonment with a maximum of $500,000. Since the law is retroactive, Brewer and Brooks will be eligible for the compensation. It can’t make up for the years that they’ve lost, but the money can help them get a solid footing as they try to rebuild their lives.

Read more about these laws here

The Brewer and Brooks cases also brought attention to the state’s long-neglected crime lab and death investigation system. Both men’s wrongful convictions involved forensic science errors that might have been avoided with stronger forensic oversight and better forensic quality assurances. In response to these problems, Attorney General Jim Hood created a task force to review how to provide the state crime lab and the medical examiner’s office with the funding and resources they need to modernize the system.

The Innocence Project works with state legislatures nationwide to adopt criminal justice reforms based on the lessons learned from wrongful convictions.