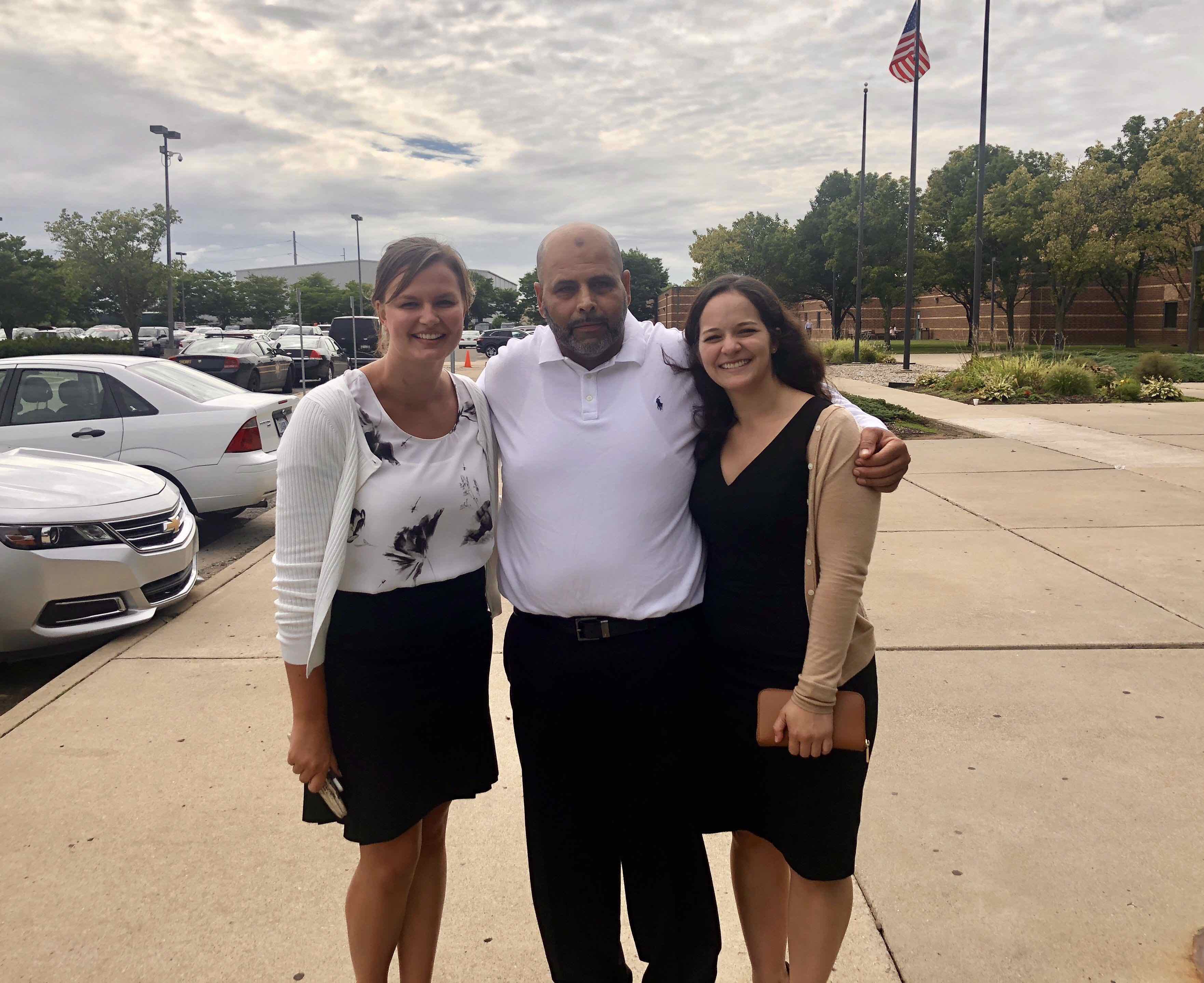 Mubarez Ahmed after his release on 9/6/18 with Sara Stappert (left) and Carolina Velarde, two law students who worked on his case. Photo courtesy of the Michigan Innocence Clinic.

Last Thursday, Michigan Innocence Clinic (MIC) client Mubarez Ahmed was released after spending 17 years in prison for a crime he did not commit. In 2002, after having spent two years in jail awaiting trial, Ahmed was convicted of a double homicide in Detroit. He was sentenced to 40-60 years in prison.

“I don’t think words can describe how I feel,” Ahmed told The Detroit News after his release from the Wayne County Jail on Thursday. “I’m speechless. The air, the trees, freedom itself … close to 18 years for something you didn’t do, I can’t wrap my head around this.”

Ahmed was convicted solely on the basis of a single eyewitness’ testimony. Shortly after the crime, police received an anonymous tip from an eyewitness and arrested Ahmed. The eyewitness then selected Ahmed in a live lineup.

Years later, the eyewitness revealed that the lead detective in the case had instructed the eyewitness to choose Ahmed shortly before the lineup occurred.

After investigating Ahmed’s case for eight years, the MIC filed a post-conviction motion in October 2017. During its investigation, the MIC discovered that a detective had falsely testified during the suppression hearing. The MIC also located two new witnesses, both of whom signed affidavits that another man had boasted about committing the murders.

In January 2018, the Wayne County Prosecutor’s Conviction Integrity Unit agreed to re-examine Ahmed’s case. Its investigation uncovered additional information that supported Ahmed’s innocence. The unit concluded that Ahmed’s conviction could not stand and agreed to support the MIC’s motion for a new trial.

“This was a really weak case to begin with … an eyewitness ID was the entire case against him. There was no other evidence,” David Moran, director of the MIC, told The Detroit News. “She described the shooter as someone of a different race than Ahmed, and there was also an obvious suspect who wasn’t investigated.”

According to The Detroit News, the MIC eventually identified the suspected shooter after a similar double homicide years later. On August 15, Ahmed was granted a new trial after the MIC proved that his conviction lacked credible evidence.

“It’s very emotional and I’m not the only one who has been wrongly convicted in there,” Ahmed expressed to The Detroit News. “Everyone talks about justice, but it seems like they’re just looking for convictions. They don’t care who is innocent and who is guilty. Proper processing and highlighting these cases will prevent more from happening.”