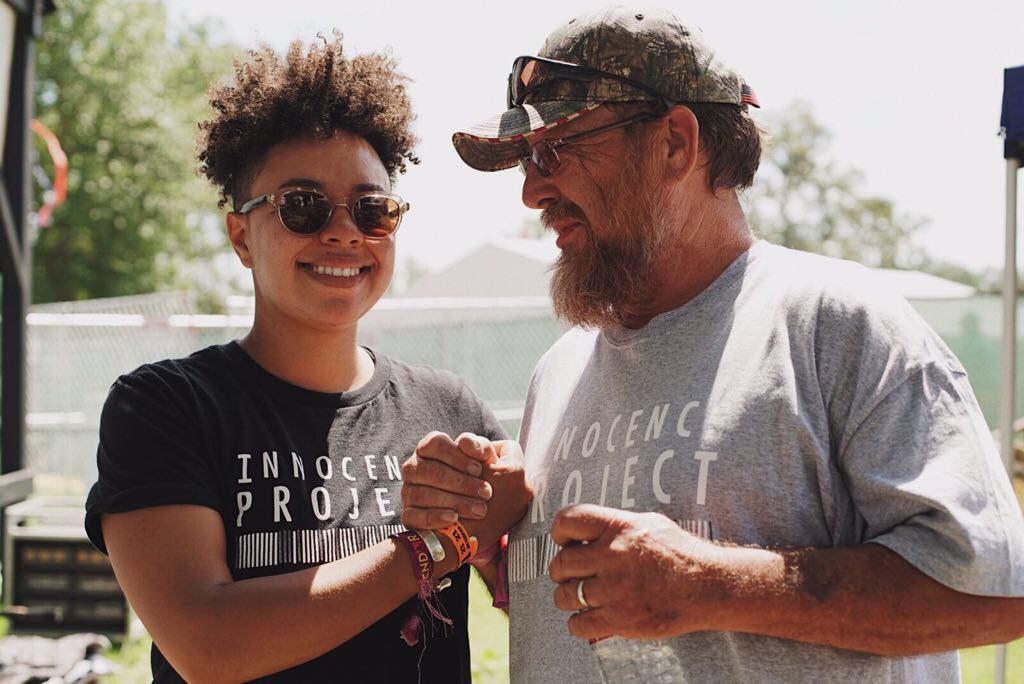 Alicia Maule and Randall Mills after their panel at Bonnaroo in June 2017. Photo by Elijah Craig.

From Thursday, June 8 to Sunday, June 11, the Innocence Project embarked on a wild journey to Bonnaroo Music and Arts Festival in Manchester, Tennessee, along with dozens of other organizations fighting for equality and justice from around the world. We met countless people who had been affected directly by the criminal justice system and were grateful for innocence work. Meet our team who worked tirelessly on Bonnaroo’s “farm”  to spread awareness about America’s flawed criminal justice system and to find new supporters to help in the ongoing struggle for justice. 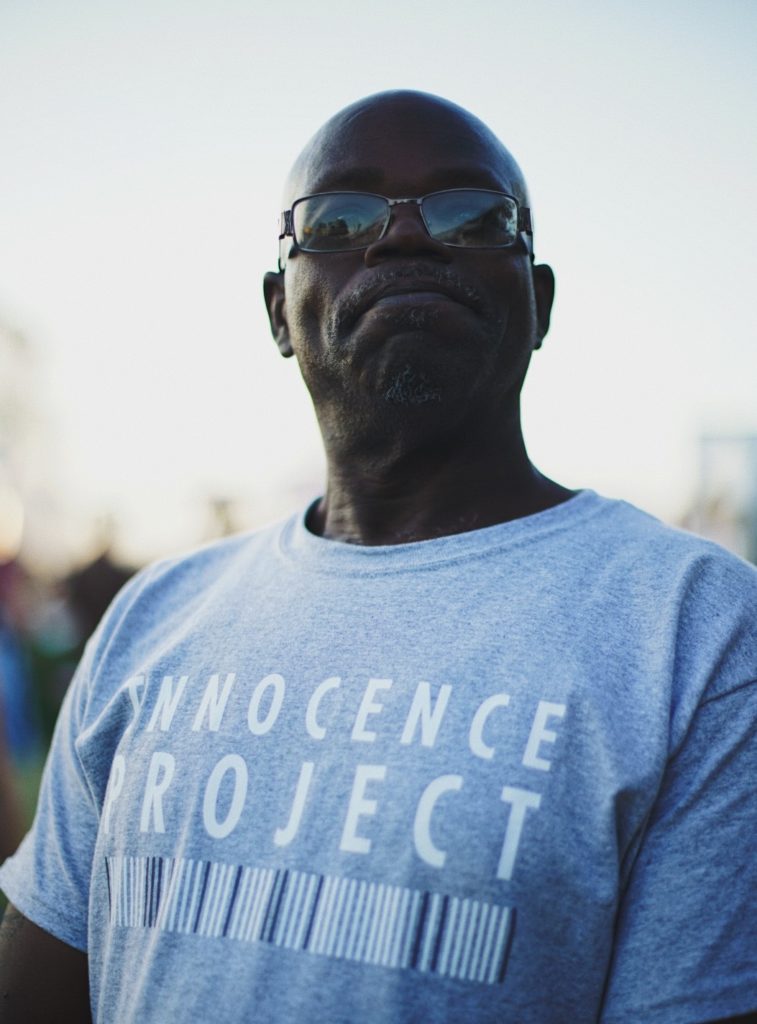 Ricky Lee Nelson, from Memphis, Tennessee, spent nearly three decades fighting to prove his innocence for a murder he did not commit. Ricky is a lively storyteller who was able to connect with hundreds of new innocence supporters at Bonnaroo. His adventurous spirit even led him to try gator for the first time at the festival.

Reflection: “#Bonnaroo! I’ve been hearing about it for ages. This is a great place to inform people about the Innocence Project. There are so many people from all over the world here. I am here because I want to continue to spread the message about wrongful conviction. It’s been a great experience. I’d come back next year.” 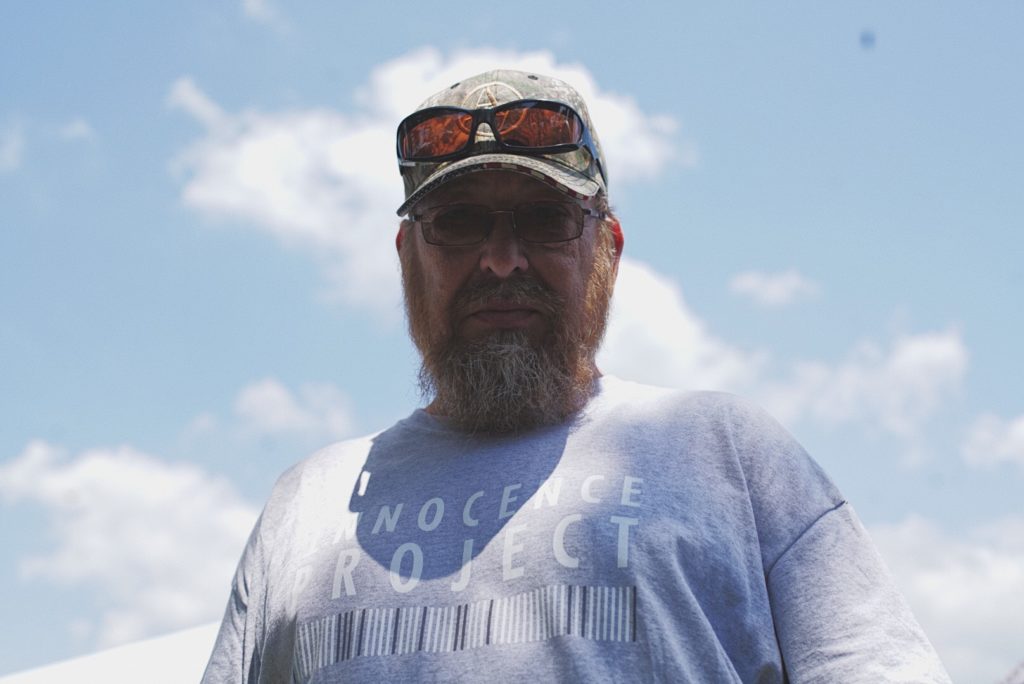 In Randall (Randy) Mills’ own words, his “world was destroyed” when he was wrongly convicted in 2000. After 11 years in prison and three more painful years registered as a sex offender, he was exonerated by DNA testing. Randy, at his first #bonnaroo as a local Tennessean from Nashville, told his story on the Solar Stage and brought dozens of people to tears.

Reflection: “Anytime I can get my story out and spread the word to people about the Innocence Project, it’s a great thing to me. It’s very rewarding that I can do stuff like this for the people who got me out of prison. There was one guy who actually came by our tent whose father is a sex offender and he knows what I went through. That stuck with me. He was very affected by the fact that I went through what his father went through as an innocent person. I think the best part about Bonnaroo was the way the crowd listened to my story. I was very moved by the response.” 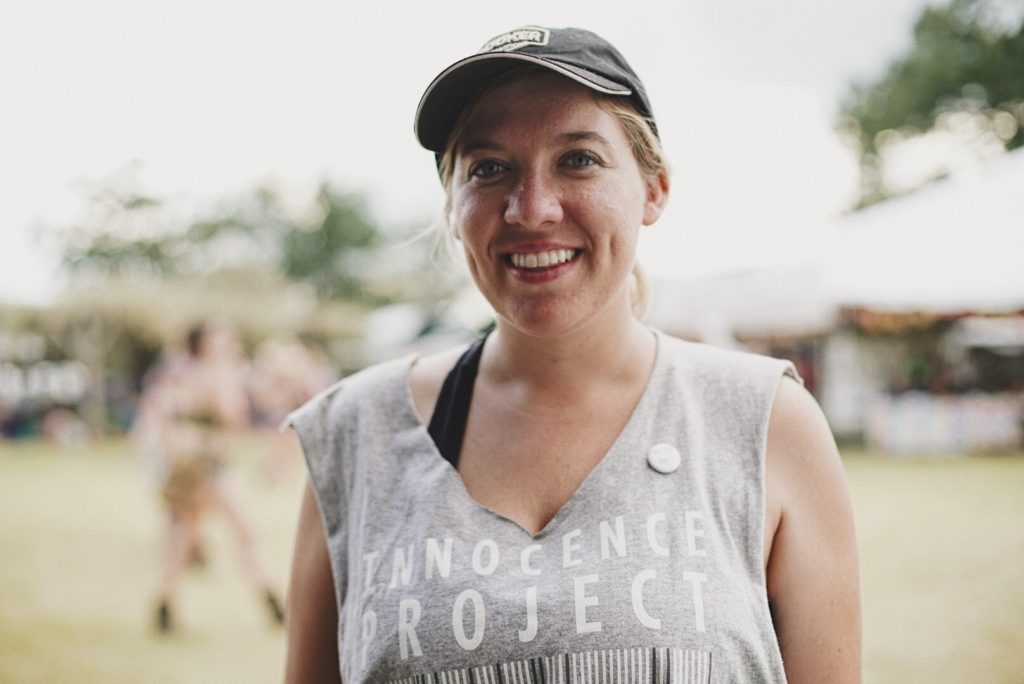 Emma Wolfenbarger from Chattanooga, Tennessee, was initially only going to Bonnaroo for one day and ended up camping out and staying all four days. Law school bound and energized about criminal justice reform, Emma was an outstanding ambassador for the organization.

Reflection: “I’ve been following the Innocence Project for a few years and wrongful convictions are an issue that led me to decide to start law school this fall. The best part of volunteering at Bonnaroo this weekend was hearing Ricky and Randall tell their stories to festivalgoers and seeing the emotional reactions. I loved getting to meet both longtime supporters of the cause in addition to people that had never heard about the Innocence Project before this weekend.”

Elijah Craig, an independent visual artist from Brooklyn, New York, beautifully captured our week at Bonnaroo through videos and photos.
Reflection: “I had the pleasure of working with the Innocence Project this weekend at my first Bonnaroo and the experience has affected my life indefinitely. I first heard about the project a little over two years ago and I was taken aback by their passion for truth. Building the rapport with my new exonerated friends Ricky Lee Nelson and Randy Mills was without a doubt the highlight of the weekend. Watching them bring people to tears, of both joy and empathy, brought new life into festivalgoers. Blessings to Planet Roo for all the love and positivity this weekend and most importantly, the Innocence Project for all the selfless dedication!” 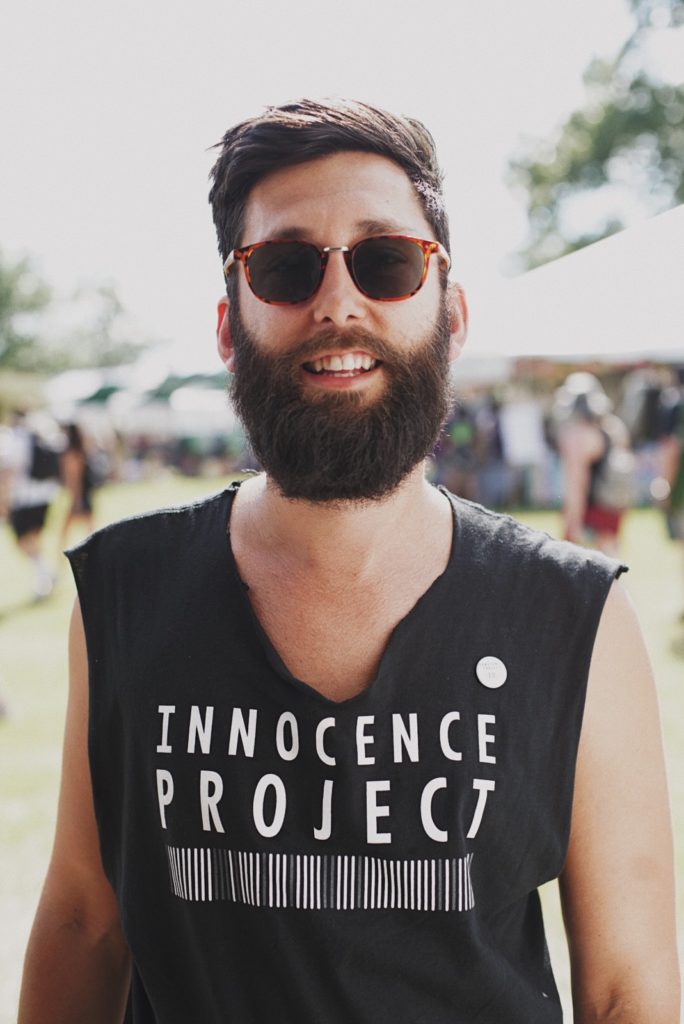 Adam Fry from Melbourne, Australia, already had tickets to the festival when he learned that the Innocence Project would be attending. He immediately reached out, asked to help out, and “came running.”

Reflection: “I had been following the Innocence Project for about 10 years from my home city Melbourne and was already going to Bonnaroo. By chance, I saw that the Innocence Project was going to have a booth there as well so I leapt at the chance to help in any way I could.
The crowd at Bonnaroo was very receptive and interested in learning about the organization’s work and what it does for the wrongfully convicted, not only while they’re in prison but also the support in re-entering society afterwards. Having the opportunity to inform and talk to people who didn’t know much about wrongful convictions in a relaxed environment was a valuable and invigorating event that I was proud to be a part of.
The biggest highlight for me was getting to meet two of the exonerees, Ricky and Randy. It’s one thing to see the exonerees on TV or read about them on the website but to meet them in person was an incredible and moving encounter that I’ll never forget. Randy’s Q&A session on Saturday was an amazing insight into not only his life and fight for freedom but his experience with the judicial system and how easy it can be to fall through the cracks.” 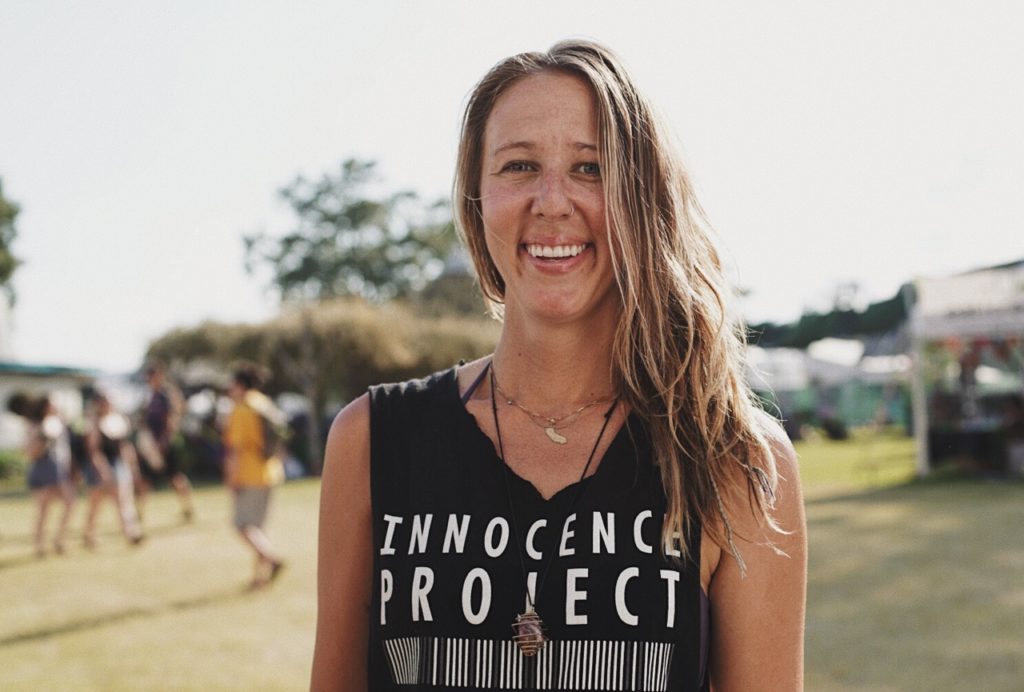 Kalla Gotry, a former public defender from Phoenix, Arizona, spent the entire week supporting the organization. She played a key role in our work at the festival.
Reflection: “I had the best experience volunteering with the Innocence Project at Bonnaroo — even better than I could have imagined. I knew I was going to meet new friends, but I had no idea the friends I met would be so welcoming, genuine and inspiring. I met people from all over the world who are working in different capacities to fight for equality and justice, and talking to these people and hearing their stories has reenergized me to get back in there and fight the good fight. Perhaps what was most inspiring was hearing the stories of the exonerees, Ricky and Randy. I was amazed at their positive outlook on life, despite having their freedom stolen from them. I feel honored to have been a part of this experience, and I am so thankful to the many people I met who weren’t afraid to be vulnerable and share their stories. I will cherish these memories forever and I can’t wait to share them with people in Arizona.”

Alicia Maule is the digital communications manager for the Innocence Project and was responsible for producing our experience at Bonnaroo.

Reflection: “It was an honor to represent the Innocence Project at Bonnaroo with two outstanding survivors of wrongful conviction, Ricky Lee Nelson and Randy Mills, along with a committed group of volunteers from around the world. The community of human-centered activists at Planet Roo was one of a kind. I’d like to thank all the hands that went into putting the music festival together, from Laura Sohn’s sustainability team to the paramedics. The level of love and precision that went into producing the week was exceptional.”

We’d like to recognize and appreciate all of our colleagues at Planet Roo who are working tirelessly to make the world a better place. Learn more about their work. 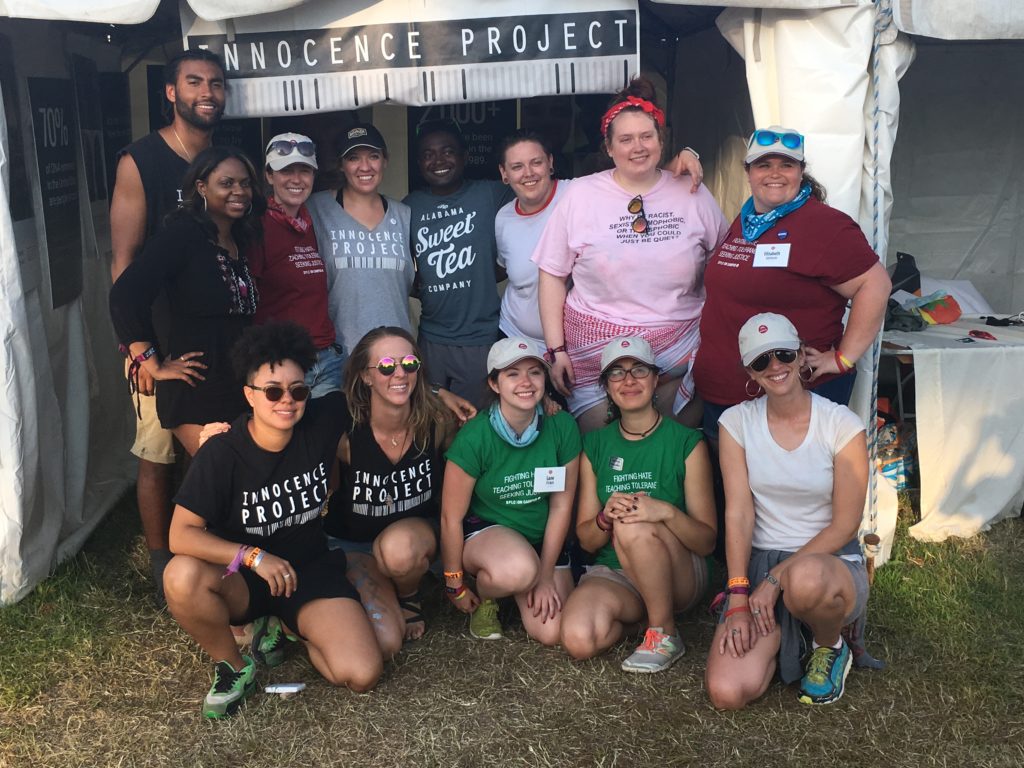 Our colleagues and new friends from Southern Poverty Law Center and Showing Up for Racial Justice. 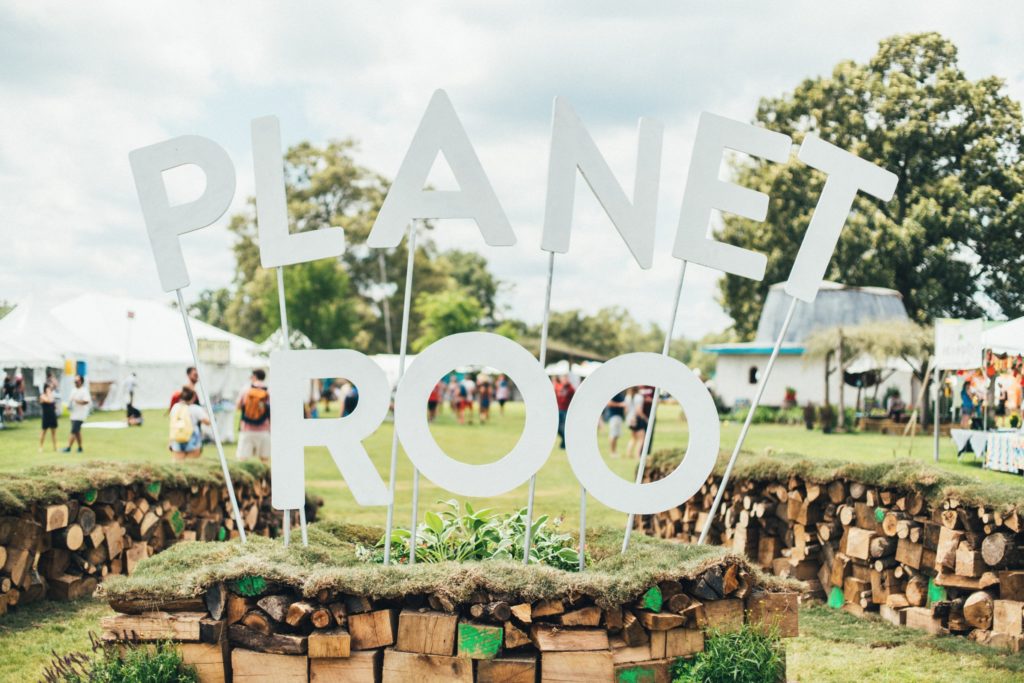 Planet Roo was the home base for all of the nonprofits fighting the good fight.

Randall Mills’ Q+A with Alicia Maule on the Solar Stage.

All photos by Elijah Craig.