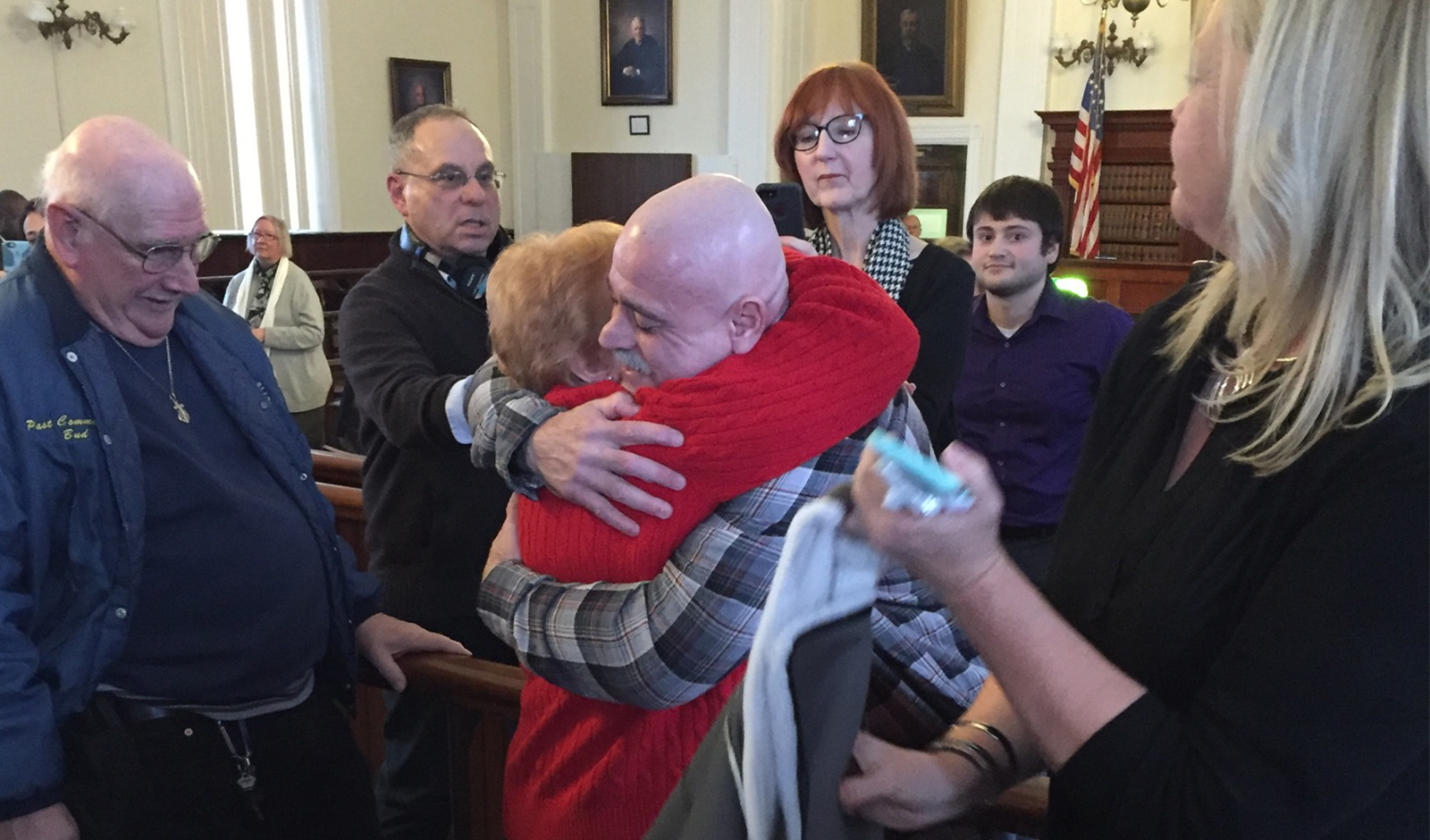 George Perrot hugging his mother after he was released on Feb. 11, 2016.

Springfield, MA (October 18, 2017) – Prosecutors representing the Commonwealth of Massachusetts filed paperwork today with the Massachusetts Superior Court dismissing the indictment against George Perrot, bringing a close to his three-decade fight for justice.  Perrot, a Massachusetts resident, served nearly 30 years in prison after having been wrongfully convicted of a 1985 sexual assault of an elderly woman in Springfield, Massachusetts.

Today’s filing by the Commonwealth takes place 20 months after attorneys representing Perrot secured his successful release from prison in February 2016.  Perrot’s release followed a September 2015 two-day hearing during which Perrot’s legal team demonstrated that his conviction had been the result of erroneous FBI hair analysis testimony provided by FBI analyst Wayne Oakes, which linked Perrot to the crime. The scientifically flawed testimony was critical to Perrot’s conviction and was emphasized by the prosecutor at both of Perrot’s trials.  The FBI testimony was particularly key given the victim’s repeated insistence that Perrot could not have been her attacker.

Following the two-day September 2015 hearing, the Superior Court vacated Perrot’s convictions related to the sexual assault and allowed his motion for a new trial.  In its filing today, the Commonwealth officially dismissed those charges, bringing an end to this litigation that has been ongoing since the 1985 crime.

“Mr. Perrot is relieved that his long journey to clear his name has finally come to an end.” -Chris Fabricant

“Mr. Perrot is relieved that his long journey to clear his name has finally come to an end,” said Chris Fabricant, director of strategic litigation for the Innocence Project, which is affiliated with Benjamin N. Cardozo School of Law. “For more than two decades, FBI agents erroneously testified or provided erroneous reports in practically every case where microscopic hair analysis was used to connect a person to a crime.  Mr. Perrot’s case was one of the first to be identified. There are no doubt many others still fighting for justice.”

“Today’s milestone is a vindication of George Perrot,” said Kirsten Mayer, partner at Ropes & Gray LLP. “That our team could secure his release and bring a sense of resolution is humbling.”

Perrot’s case is significant because the hair evidence used to convict him had been lost or destroyed long before the Innocence Project and Ropes & Gray became involved. This meant DNA analysis of hair samples, a typical practice in efforts to seek a new trial, was not an option in his case. The FBI hair analysis testimony had been critical to Perrot’s conviction, particularly since the victim consistently insisted that Perrot could not have been her attacker.

At the urging of the Innocence Project and the National Association of Criminal Defense Lawyers, the FBI and Department of Justice were motivated to conduct a review of cases involving microscopic hair analysis after three men, Donald Gates, Santae Tribble, and Kirk Odom, were exonerated by DNA evidence in three separate cases where different FBI analysts had provided scientifically invalid testimony regarding hair analysis. Significantly, erroneous microscopic hair analysis contributed to 20 percent of the nation’s 351 DNA exonerations.

“Today’s milestone is a vindication of George Perrot.” -Kirsten Mayer

In September 2015, the Massachusetts Superior Court convened a hearing where the prosecution and defense presented experts to testify on the nature of microscopic hair analysis, the evolution of the scientific community’s understanding of the limits of this technique since the time of trial, and the significance of the erroneous testimony. The 2015 hearing contributed to the court’s February 2016 ruling that Perrot was entitled to a new trial “because of the introduction of hair evidence that in numerous and material respects exceeded the foundation of science.”

Lisa Kavanaugh, Director of the Innocence Program for the Massachusetts Committee for Public Counsel Services, added, “Mr. Perrot’s ordeal exemplifies the tragic human cost of forensic error and the distorting effect of tunnel vision on the integrity of police investigations. Mr. Perrot has steadfastly maintained his innocence of the tragic sexual assault at the heart of this case, and the dismissal of all charges connected with that assault is both welcome and long overdue.”