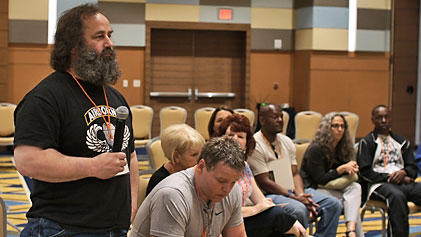 
Nearly a decade after DNA evidence exonerated Dennis Maher of two 1983 rapes he did not commit, the courts have finally expunged his criminal record. Though Maher had been compensated and his honorable military record restored, his name had not been fully cleared.

Maher, an Army sergeant, spent 19 years in prison for the crimes. He was spotted near the crime scene shortly after one of the incidents wearing a red hooded sweatshirt similar to the one worn by the perpetrator. No other evidence linked Maher to the sexual assaults, but he was convicted in two separate trials and sentenced to life in prison. His initial requests for DNA testing were ignored, and police claimed that all biological evidence from his case had been destroyed. With the help of the Innocence Project, he was exonerated in April 2003.

, Maher and his family used the occasion to celebrate.


Surrounded by his family at a two-story home in North Tewksbury with a big backyard, Maher said he is relieved to have this last cloud lifted finally from his record.

Though records in such cases are usually expunged, they weren’t in Maher’s case. And since the arrests and charges still used to come up on his record, getting a passport and traveling out of the country was very difficult. “Too many hoops to jump through,” he said.

For that reason, he and his family have never traveled outside of the country, although they want to go places like Niagara Falls or Toronto to visit friends. But they now plan to do so, later this year.

For most exonerees, having their criminal record expunged is a separate legal procedure and doesn’t occur automatically upon exoneration. Though the Innocence Project doesn’t keep statistics on the subject, a number of our former clients are still fighting to be fully cleared and have their records expunged.