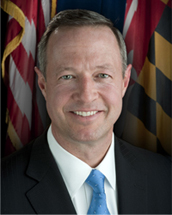 Maryland Governor Martin O’Malley writes about his state’s decision to repeal the death penalty in a recent Politico opinion editorial. He writes:

Improving public safety is the most fundamental responsibility of our government. The death penalty does not make us stronger or more secure as a people. It is expensive, ineffective, and wasteful as a matter of public policy; it is unjust as historically applied; and its imperfections can and do result in the occasional killing of innocent people.”

On Friday, March 15, Maryland became the sixth state in six years to repeal the death penalty in favor of life imprisonment without parole. Eighteen people have been exonerated through DNA testing after serving time on death row. Kirk Bloodsworth, one of these 18 men, was instrumental in helping to build consensus for the legislation.

about the growing movement to end capital punishment.
Read more about