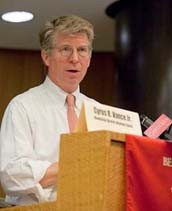 In a speech delivered to the New York Bar Association on Wednesday night, Manhattan District Attorney Cyrus Vance said that the 2010 creation of the Conviction Integrity Unit has reinforced his office’s commitment to pursuing cases only when prosecutors are convinced beyond a reasonable doubt of guilt, reported Reuters.

“Put simply, if we are not convinced beyond a reasonable doubt that the defendant is guilty, how do we go into court and ask a jury of twelve to find him guilty?” he said.

In the past two years, the DA’s office has received 118 post-conviction claims of innocence—a handful of which lead to vacated convictions.
Vance credits the success of the Conviction Integrity Unit with its two components. The first is an applied set of guidelines recommended by outside experts, including Innocence Project Co-founder Barry Scheck, designed to prevent wrongful convictions. And the other part is the examination of post-conviction innocence claims.
According to Vance, DNA evidence has yet to play a role in confirming an innocence claim.

Without dispositive scientific evidence, the office must consider how to weigh a jury’s verdict. Vance said the unit would vacate a conviction despite a guilty verdict if prosecutors discovered new evidence or a flaw the jury could not have been aware of.

“When we exercise our power, it has to be done responsibly and, I believe, with a sense of humility,” he said. “And that may require us to dismiss charges, no matter the public outrage and promise to proceed.”